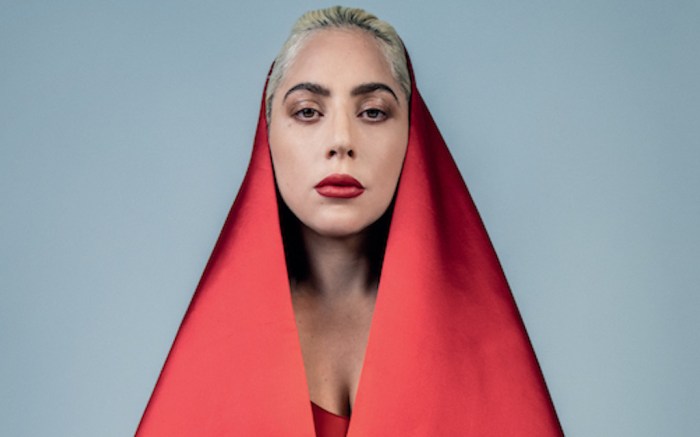 Lady Gaga is polished and sophisticated for W Magazine.

The “Judas” singer dazzles on the newest cover of W that featured her along with Kristen Stewart, Denzel Washington, Jennifer Hudson, Jessica Chastain and Benedict Cumberbatch to celebrate the publication’s “Best Performances” issue.

For Gaga’s cover, she slipped on a black dress that incorporated sleek peekaboo cutouts and a dramatic red flower pinned to the bodice of the garment. For another shot within the magazine, Gaga poses with a red cape draped over her head.

For the last look within the magazine, Gaga wore an all-white streamlined outfit that had a white one-sleeve dress that had a thigh-high slit and a matching hood paired with her signature Pleaser 8-inch heels in white.

The interview poses questions about the biggest film releases of the year and their underlying theme of family. Along the way, the celebs are asked about their talent and what it’s like bringing these characters to life.

On the romantic chemistry between her character, Patrizia, and her soon-to-be husband, Maurizio Gucci when they meet at the disco in the “House of Gucci”:

“Romantic scenes can’t just be two people who look good together—there has to be that nonverbal communication. Patrizia was a disco queen who so wanted to be a socialite. When she was just 12 years old, her mother showed her photos of eligible bachelors. I felt Patrizia would dance like she was underwater, like she was coming up for air. Everything about her had to do with striving. At the disco, she knew she was seen—and in a way, it was the last time she was free.”

Explaining how she became her character:

“…The most important element in becoming Patrizia was dyeing my own hair brown. I couldn’t be blonde with that Italian accent—I was still myself. It was also important to me that the film not be a red carpet. Fashion was a key part of Patrizia’s survival; she tried so hard, but she was never as shiny as the Guccis.”

On how she knew she was ready to let the character go following filming:

“On the last day of filming, I was on the balcony of my apartment in Rome, and I was blasting Dean Martin singing ‘Mambo Italiano,’ and I had a cigarette hanging out of my mouth. I was Patrizia. But I knew I had to say goodbye to her: Large swarms of flies kept following me around, and I truly began to believe that she had sent them. I was ready to let her go.”