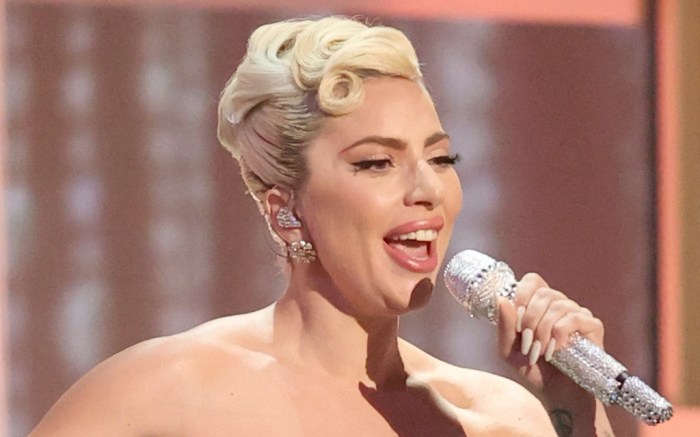 Lady Gaga showcased her jazz vocal skills in sharp style while performing in Las Vegas at the 2022 Grammy Awards on Sunday. The musician was nominated with Tony Bennett for five awards this year, including Record of the Year and Album of the Year.

The Academy Award-winning musician took to the stage to perform a jazz musical tribute, featuring the songs “Love for Sale” and “Do I Love You.” Along with a band and a video-taped introduction from Bennett, her performance was complete with a sharp mint green gown.
The strapless silk Elie Saab number featured a wrapped bodice, flared midi-length skirt and large bow at its back. Completing Gaga’s couture look were dazzling diamond, platinum and gold Tiffany & Co. stud earrings from its 2022 Tiffany Blue Book Collection, as well as a glittering microphone.
For footwear, Gaga opted for an equally chic pair of pointed-toe pumps. The “House of Gucci” star’s deep gold metallic style featured triangular toes, as well as stiletto heels totaling at least 4 inches in height. Her footwear created an elegant and sharp complement to her look, allowing the dress — and her powerful vocals — to make the greatest statement.