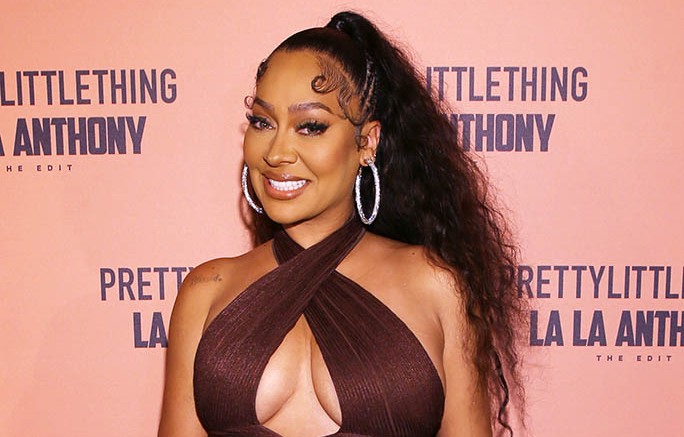 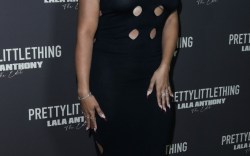 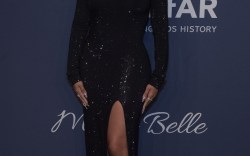 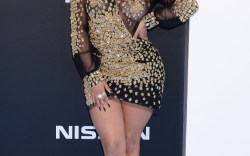 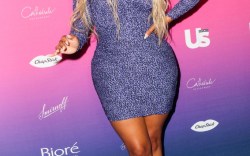 The social media personality pulled out all the stops for the Queen B celebration in an Instagram video on Sunday modeling chic footwear at Village Revival Records in New York with Beyoncé’s new song “Thique” playing in the background.

For the occasion, Anthony went for head to toe sparkles. She wore full Dolce & Gabbana ensemble that included a silver bodysuit with large rectangular shaped gems lining the front. Each gem, which varied in color from red to yellow to purple, featured a gold frame as well as sparkly detailing around. She layered the leotard over a pair of barely there, diamond encrusted fishnet tights.

On her feet, the 40-year-old slipped into a pair of knee-high boots. The shoes featured a black base with colorful patterns including purple flower shaped gems as well as matching detailing to her leotard. The pointed-toe boots gave her some height with their thin stiletto heels.

Anthony also accessorized with gold headgear which featured a wire frame that ran across her head and cheekbones. She also wore a thick gold ring that covered her middle finger as well as a thin bracelet.

The star captioned her post “It’s a RENAISSANCE…celebrating @beyonce tonight…I love a themed party!! THAT THIQUE”

In another post Anthony made, she left a longer message. She wrote “It took me all weekend to post these pics I’ve been recovering from partying TOO MUCH! Had a blast celebrating @beyonce and dancing all night to RENAISSANCE! We had so much fun! I love themes!! Thank you @dolcegabbana for this outfit and these boots!!”

Anthony is no stranger to ultra glam looks. She is often spotted sporting matching sets, color coordinated looks with metallic and sparkling details.
Flip through the gallery to see La La Anthony’s glamorous style evolution through the years.