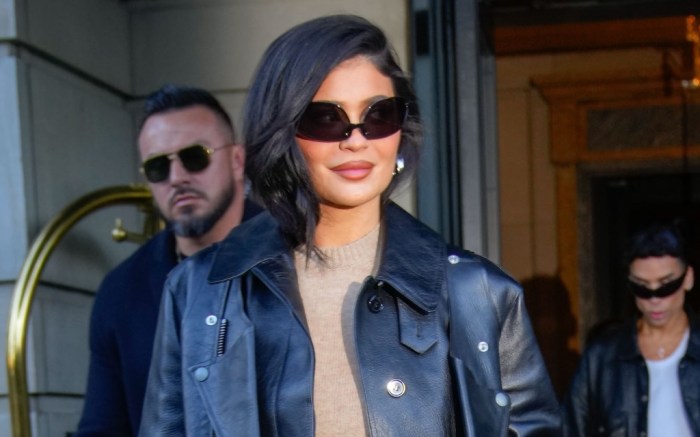 Kylie Jenner made a case for rompers in the fall when the Kylie Cosmetics founder stepped out in New York on Wednesday.

Days after attending the CFDA Fashion Awards alongside her sisters and mother, Jenner appeared to stick around the city. OShe was seen in a head-to-toe Raf Simons look. She wore a black leather oversized jacket over a romper. Her brown romper was made up of a cozy sweater material. Jenner added black sunglasses as well as a geometric structured bag to her look.

Jenner added pointy pumps to complete the ensemble. She slipped into black patent leather pumps with an angular heel. Pointed-toe shoes came back into prominence in 2021 when live events started happening again. The timeless style of shoe often streamlines any ensemble from its sleek silhouettes and daring heels. In addition to Jenner, celebrities such as Saweetie, Sarah Jessica Parker and Heidi Klum have also worn the style.

When it comes to her footwear style, the “Kardashians” star goes for a range of different styles like pointed-toe pumps, strappy sandals and platforms by Alexandre Vauthier, Andrea Wazen and Versace, among other luxury brands. Her off-duty rotation also varies widely, including Bottega Veneta sandals, Louis Vuitton slides and Prada combat boots. For athletic activities, Jenner regularly wears sneakers from Hoka, Nike x Off-White and Balenciaga.