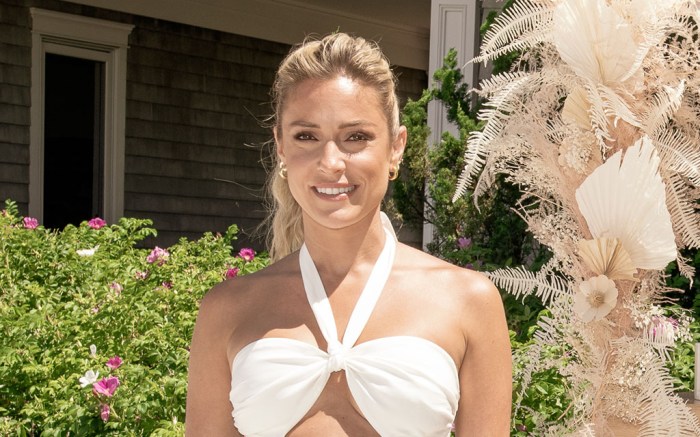 Kristin Cavallari held a weekend-long celebration in the Hamptons, NY that featured many fashionable outfits and jewelry from her accessories brand, Uncommon James. The entrepreneur wore a clean-cut white ensemble featuring a halter top with cutouts at the center, looping in and out by rope knots. The top spread, flaring to the back as the rest of the fabric stayed separate.

The outfit continued with a pair of white straight-legged pants that met the epitome of summer fun and style.

With light accessories and a slicked hairstyle with a bun, it capitalized on the cleanliness of the white and the sun reflecting on her made her skin glow. To bring this outfit a step further, were her white mules with a diagonal strap over her toes.

The footwear matched the essence of chicness as well as the hints of causality and beach aesthetics with a shoe that is both casual and dramatic. Mules can work for a floral summer dress or an edgier ensemble for the night, it’s all about the intention.

For another event, she exchanged her white for tan colors. She wore a chestnut brown activewear set that featured a sports bra with a round neck and thick straps. Covering her midriff were high-waisted leggings that looked soft and definitely comfortable. Activewear sets are versatile as they work for a casual day lounging around at home and can be utilized for an errand run.

This Uncommon James weekend festivity hosted numerous of guests with cocktails and oceanside views that would make this summer unforgettable. The reality star turned businesswoman and her sense of fashion are a knitted relationship that cannot be broken. Her palette of earth tones and light colors, as well as her sense of footwear, is unmatched.

Uncommon James is Cavallari’s collection of accessories for women on-the-go. Embodying her own sense of style, she designed jewelry that is feminine, classic and trendy with a pop of personality.