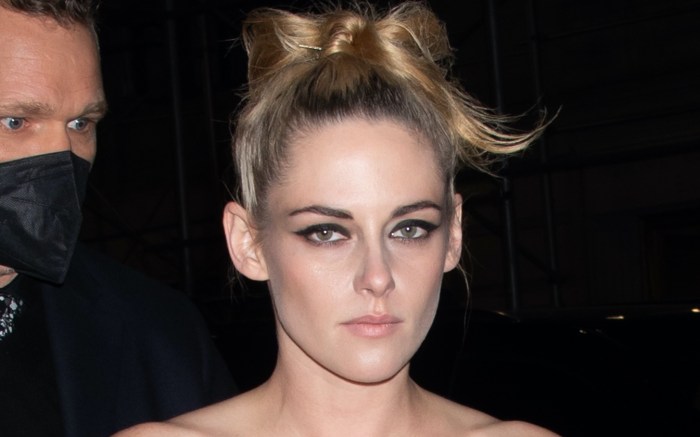 The “Twilight” star suited up in a Bella Freud suit, which featured a maroon, navy and white pattern. The blazer and pants featured a velvety texture, giving her ensemble a relaxed softness. Stylist Tara Swennen paired the set with a sultry black lace crop top by Dolce and Gabbana, featuring a deep neckline. The look was finished with Stewart’s go-to silver lock necklace by Jillian Dempsey.

Loafers have been a top footwear trend over the last several seasons, due to their relaxed nature, plus whimsical and practical features like penny loafer straps and lug soles. Brands like Prada, Gucci and Ganni have released their own styles that have become hallmarks of the trend. Aside from the “Clouds of Sils Maria” actress, stars like Elsa Hosk, Bella Hadid and Rita Ora have worn pairs by Celine, Vinny’s and Alexander McQueen in recent weeks.

Stewart’s become known for her edgy approach to fashion since rising to fame. As a brand ambassador for Chanel since 2013, the “Personal Shopper” star often wears the French label’s footwear on and off the red carpet. Outside of Chanel, she’s been seen in strappy sandals and pointed-toe pumps from luxury brands including Christian Louboutin, Tamara Mellon, Malone Souliers and Jimmy Choo. She’s also been spotted in edgy boots by Dr. Martens and Casadei. When off duty, Stewart prefers Timberland work boots, Public Desire slippers and loafers from Poesie Veneziane and Hereu. Her frequent go-to looks also include Adidas, Vans and Converse sneakers.

Give your next look a dapper edge with loafers.

Click through the gallery to see Stewart’s boldest shoes on the red carpet.