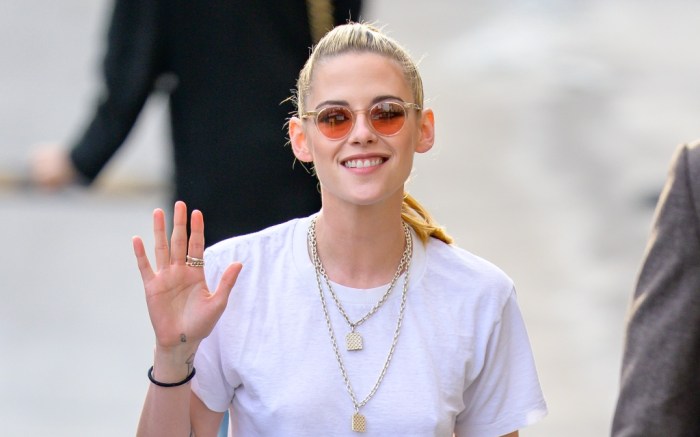 The actress appeared on the late-night talk show on Tuesday night to talk about her role in “Spencer” and her Oscar nomination for her portrayal of Princess Diana, plus her recent engagement. While on the show, Stewart wore a sequin jumpsuit, styled by Tara Swennen. Her long-sleeve black jumpsuit, courtesy of Ezgi Cinar, was covered in patches with cobalt blue sequins throughout. Stewart kept her accessories to a minimum, only adding a few rings to the overall look.

Stewart added a pair of classic pumps to the ensemble. She wore a pair of black patent leather Hot Chick 100mm Heels from Christian Louboutin, the same style that she just wore last week at The Hollywood Reporter’s Annual Nominees Night.

The pumps featured a pointed toe and scalloped edge at collar. The thin stiletto heel reached 4 inches in height. Stewart’s style is available on Neiman Marcus for $745.

Earlier in the evening, when the “Twilight” alum was heading to ABC’s studios for the taping, she wore a different look. This time, Stewart went casual with a white T-shirt paired with dark gray trousers

Stewart’s style can be considered a twist on punky edge, oftentimes opting for darker pieces from brands such as Dr. Martens, Malone Souliers, Vans and Thom Browne amongst other major labels. Dipping her toes into the high fashion world, Stewart signed on as an ambassador for Chanel beauty in 2016 and has since appeared in a series of ad campaigns for the brand on top of continuously sitting front row at all the label’s runway shows.