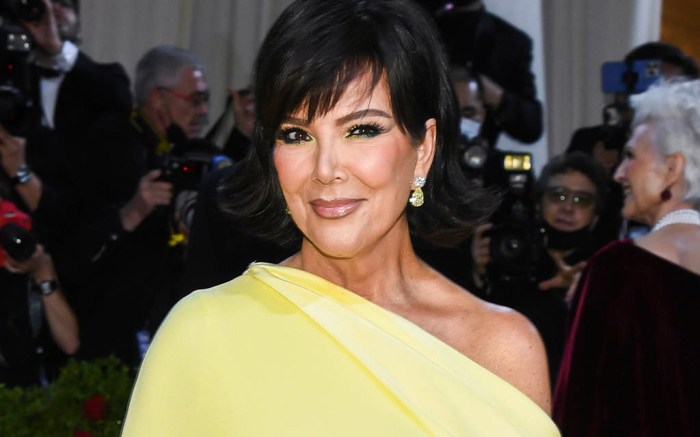 The matriarch of the Kardashian-Jenner family showed up to the Met Gala tonight in New York looking like the embodiment of elegance in Oscar de la Renta.

With “The Kardashians” newly on Hulu, all of the Kardashian and Jenner sisters made their appearances at the 2022 Met Gala. While Khloe and Kourtney Kardashian arrived alongside Kendall and Kylie Jenner (and Kourtney’s fiancé Travis Barker, of course), Jenner and Kim Kardashian hung back to make entrances of their own.

Jenner showed up in a stunning yellow silk gown from Oscar de la Renta. The dress is lined in silver embroidered beading. The silk cascades across the front to cover one shoulder, while the other side features a drop sleeve. Jenner paired it with a long white satin glove, yellow diamond drop earrings and a sparkly clutch. For footwear, she chose a silver sandal.

The reality star told a reporter on Live From E! that she just wanted something “glamorous, chic and easy.” She also divulged that she got ready alongside all of her daughters earlier that day, and that her look was inspired by first lady Jackie Kennedy.

For her beauty look, Jenner opted for a black bob wig that is a perfect nod to the style Jackie Kennedy wore to a White House State Dinner in 1961. Jenner tied it all together with subtle yellow eye shadow in the inner corners of her eyes.