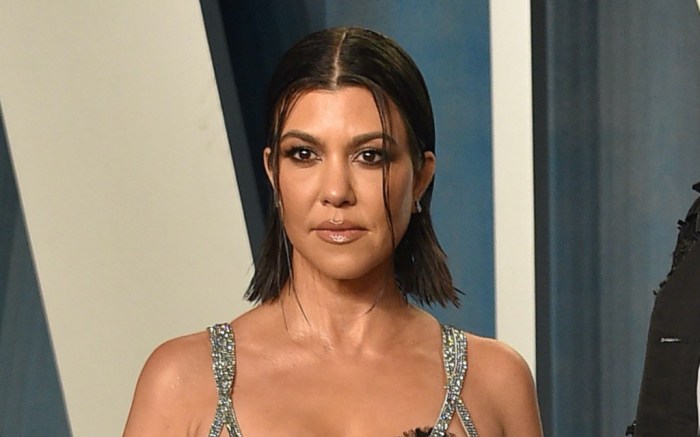 The “Kardashians” star posed in a mirror selfie that she posted to her Instagram story on Sunday evening. In her post, she wore a gothic glam look consisting of a black leather jacket with a slip dress underneath. Her jacket featured several details covering the garment, including silver studs, black and white patches and zipper detailing. Her slip dress that she added under the jacket was less visible, but appeared to be in an orange ombre-like colorway. The dress also featured a black lace hem along the bottom of the piece. Kardashian added black oversized sunglasses and a black mini top handle bag to the finished look.

For her footwear, the Poosh founder opted for a pair of black leather boots. The boots hit right below Kardashian’s knee and featured a scrunchy material near the ankles. The boots also featured a square toe design. The shoes had a short chunky heel that added at least 2 inches to Kardashian’s frame.

Kardashian’s style has evolved ever since she starting dating her now husband, Travis Barker, going from tailored, classic outfits and athleisure to punk, and that style can be seen in this latest look. Lately, she has been seen in many monochromatic looks, along with corsets and leather. She has also revamped her footwear to include more strappy heels, pointed-toe boots and Converse sneakers.

Flip through the gallery to see Kourtney Kardashian’s best shoe moments over the years.