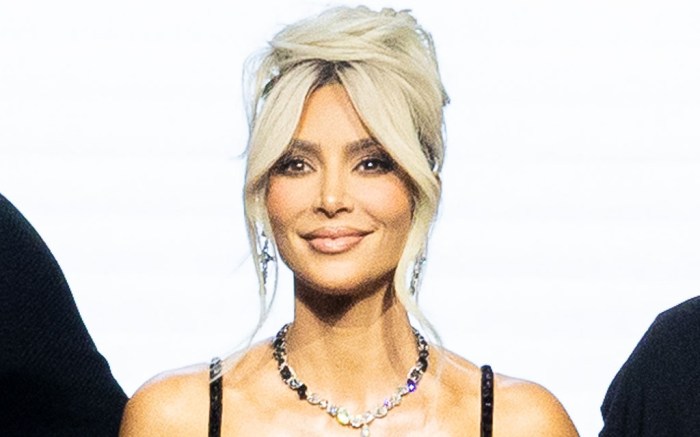 Kim Kardashian’s face is all over Los Angeles. The star of Stuart Weitzman’s fall 2022 campaign can be seen on multiple billboards around the city starting today.

“SPOTTED IN LA: Kim Kardashian. Stuart Weitzman Fall 2022. All over the city. Up now. Catch them all,” the brand announced on Instagram. Kardashian is the face of their “Stand Strong” collection.

For the campaign, the reality show star wore different outfits. Kardashian paired a black fitted cowl neck bodysuit with the designer’s new thigh-high Ultrastuart 100 Stretch boot. The businesswoman also posed with her legs crossed in a solid black oversized hoodie, wearing the Weitzman’s Stuart Ruche 100 Boot. Her third look for the campaign featured a patent leather bodysuit paired with a cross-embossed leather boot and a clear heel from the designer. The thigh-high boots are the Lucite 100 Wedge.

Her looks were styled by Alastair McKimm. Her glamorous look was created by hairstylist Chris Appleton and makeup artist Ariel Tejada. Tejada works exclusively with Kardashian and her sister Kylie Jenner while Appleton has worked with numerous stars including Jennifer Lopez and Dua Lipa.

The new line is inspired by the brand’s past looks mixed in with their vision for the company’s future. Stuart Weitzman recently announced that Kardashian has become the brand’s newest global ambassador. This collaboration comes right after Kardashian finished her fashion week tour through Paris, Milan, and New York.

With this campaign, the brand is focused on establishing themselves in the luxury market while also continuing their partnership with Vital Voices Global Partnership to invest in female leaders like Kardashian. The new line contains 149 new styles featuring various styles including sparkling platform pumps, metallic booties and velvet loafers. The line is now available on the brand’s website and in select stores nationwide.