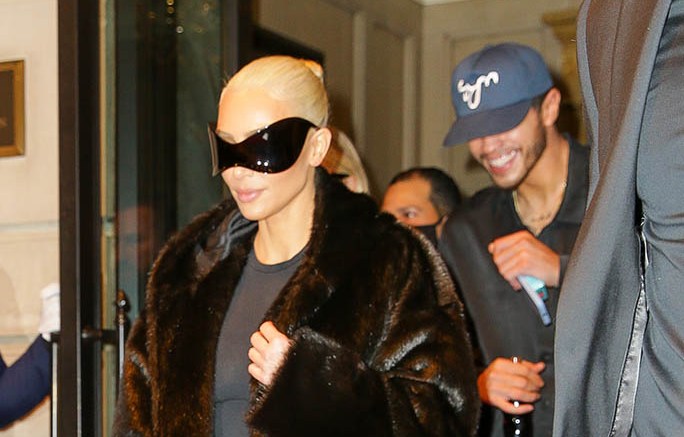 After making a fashionably late, but breathtaking arrival at the 2022 Met Gala with her boyfriend Pete Davidson, Kim Kardashian decided to skip the after party festivities. The reality television superstar and “SNL” comedian was spotted leaving their hotel in New York City with Khloe Kardashian on Tuesday.

While making her way to the fashion benefit gala, Kardashian told her close friend Lala Anthony that she had plans to have a pizza and donut party with Davidson. The Skims mogul wanted to spend the night indulging after losing 16 pounds to fit into Marilyn Monroe’s iconic nude crystal-covered dress.

After enjoying the night in, Kardashian made her way out of her hotel in a cozy ensemble. The industry muse wore a floor-length black fuzzy coat over a basic T-shirt. She teamed her top with baggy, wide-leg pants. Sticking to her signature aesthetic she added a pair of futuristic frames and slicked her freshly dyed blond locs back into a bun. The length of her pants gave a peak at her footwear choice, which appeared to be a pointy silhouette.

The 2022 Met Gala’s theme is “In America: An Anthology of Fashion,” exploring the foundations of American fashion — specifically, identifiers of American style and individual designers. The exhibit included 100 garments by independent designers and dressmakers from the 1800s to the mid-late 1900s in the Museum’s American Wing period rooms. There will also be “freeze frames” of film vignettes in each room, highlighting the aesthetics of eight different film directors: Janicza Bravo, Sofia Coppola, Julie Dash, Tom Ford, Regina King, Martin Scorsese, Autumn de Wilde and Chloé Zhao. Supported by Instagram and Condé Nast, the event raises funding for The Costume Institute’s exhibitions and future improvements. The exhibit will be open to the public starting on May 7, and — along with Part 1, which opened last September — close on Sept. 5, 2022.