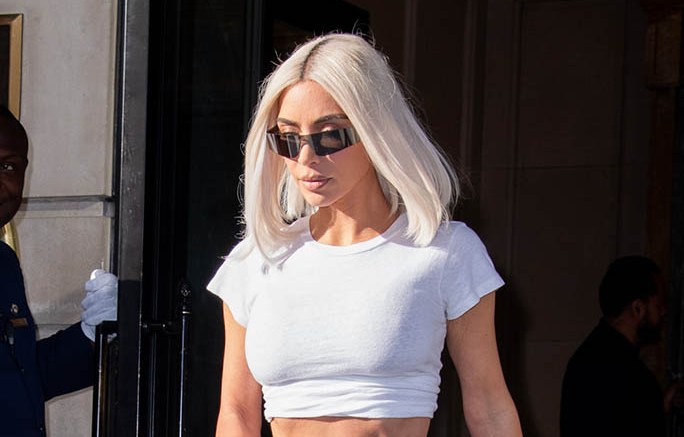 Kim Kardashian was the ultimate Balenciaga babe, sporting a sensational summer outfit and new hairdo as she made her way to the “Today” show in New York City on Tuesday. The reality superstar and business mogul stopped by the morning show to  promote her new skincare line, SKKN by Kim and denied accusations that she damaged Marilyn Monroe’s iconic Bob Mackie gown after wearing to the 2022 Met Gala.

“I mean, it was such a process. I had to change. I showed up to the red carpet in a robe and slippers and I put the dress on, on the bottom of the carpet went up the stars. I probably had it on for 3 minutes, 4 minutes. And then I changed right at the top of the stairs. There was handlers and gloves that put it on me,” Kardashian explained.

For her appearance, Kardashian wore a white short-sleeve crop top with Balenciaga’s signature boot pants. The slick and sporty style featured a red, white and blue design throughout. The hybrid garment is comprised of skintight leggings with built-in pointy stiletto boots.

She styled her platinum tresses in a short blunt cut bob and opted for soft neutral makeup. To add more flair to her look, the shapewear guru accessorized with futuristic frames and carried Balenciaga’s silver cagole handbag.

Kardashian is known for having a trendy and daring sartorial sense. She tends to gravitate towards pointed-toe boots and edgy silhouettes that stay true to her aesthetic. The former “Keeping Up With the Kardashians” star has made her mark in the fashion industry by creating her own Skims line that focuses on loungewear and shapewear with functionality in mind. She has also starred in campaigns for Balenciaga, Balmain and Fendi.