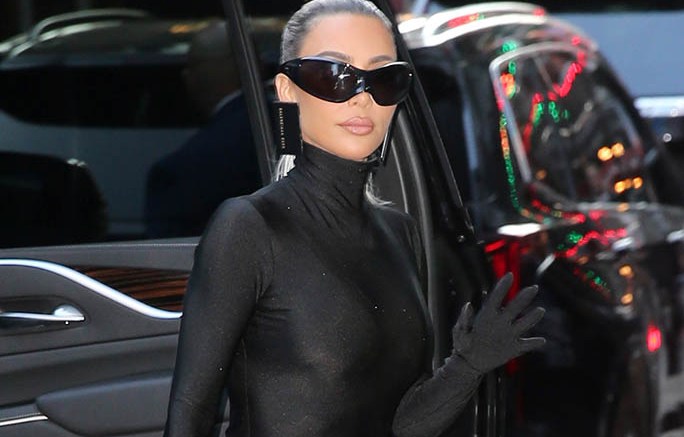 Kim Kardashian pulled out a wild ensemble for “Good Morning America” in New York City on Tuesday. The reality superstar and business mogul stopped by the morning show to talk about her many business ventures, pursuing a law degree and season two of Hulu’s “The Kardashians” which officially premieres on Sept. 22.

“The one thing I’m really excited about for the premiere episode is we haven’t done any promos on it, we’re not going to. It’s like a really seriously deep, vulnerable episode that we really haven’t talked about. So I think people will be really surprised and hopefully they will enjoy getting to see the first episode. This season is just about so much independence for me,” Kardashian explained.

For her appearance, Kardashian wore a black skintight turtleneck top. The garment had a ruffled mock neck and also featured fitted gloves that were made of the same fabric. The Skims founder teamed the piece with Balenciaga’s signature boot pants. The slick style featured a tiger print design throughout and is comprised of skintight leggings with built-in pointy stiletto boots.

Kardashian styled her hair in a sleek bun and left a few pieces out. The television star stayed true to her bold fashion sense by accessorizing with futuristic shades, dramatic rectangle Balenciaga earrings and a fuzzy black handbag.

When it comes to fashion, Kardashian is known for having a trendy and daring sartorial sense. She tends to gravitate towards pointed-toe boots and edgy silhouettes that stay true to her aesthetic. The media personality has made her mark in the fashion industry by creating her own Skims line that focuses on loungewear and shapewear with functionality in mind. She has also starred in campaigns for Balenciaga, Balmain and Fendi.

PHOTOS: Click through the gallery for more of Kardashian’s boldest looks over the years.