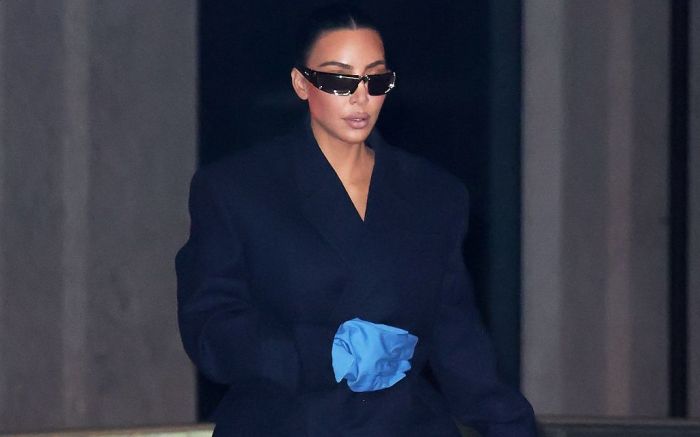 Kim Kardashian just proved that she’s a force in fashion. The reality star has been serving up some serious style while out at Milan Fashion Week. On Thursday, she was spotted arriving at a Prada party.

The industry muse continued with a menswear-inspired aesthetic by stepping out in a navy blue suit. Her oversized blazer was complete with pointy shoulder pads and sleek lapels. The garment also accentuated at the waist, which added a feminine touch to the loose-fitting ensemble. Kardashian paired the sharp jacket with matching trousers.

The former “Keeping Up With the Kardashians” star slicked her raven locs back into a bun and opted for her signature neutral makeup. Her accessories immediately stole the show as she complemented her business-casual outfit with bright blue gloves and futuristic silver sunglasses.

To ground everything, the superstar mogul finished off her look with black suede pointed-toe boots. The hem of her slacks helped to show off the sharp silhouette, which included a chunky block heel.

Kardashian has been pulling out all the stops for Milan Fashion Week. Following Prada’s Fall 2022 runway show, where she cheered on her sister Kendall Jenner from the front row, the socialite wore a black crocodile-embossed bandeau top with wide-leg paper-bag waist pants and a coat with pointed lapels, which each featured lizard embossments and a faint glossy sheen. The Balenciaga campaign star amplified the leather outfit with black sunglasses and leather Prada gloves. The length of her pants gave a glimpse at her footwear, which appeared to be pointed-toe boots.

Click through the gallery to see more of Kardashian’s bold style moments over the years.