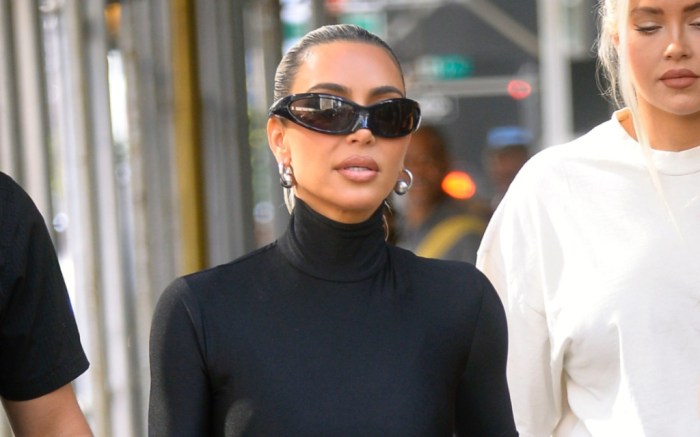 Just before the second season of her hit reality series premieres, Kim Kardashian is making the rounds in New York.

Shortly after appearing on “The Today Show,” the businesswoman made an outfit change and hit the streets of NYC again. She spoke about pursuing a law degree, her many business ventures and season two of Hulu’s “The Kardashians.” While her morning show attire included a black skintight turtleneck top paired with Balenciaga’s signature boot pants in a tiger print, she went with a different look later in the day.

Kardashian wore a black turtleneck with built-in gloves and a matching high-waisted long skirt. She added a pair of slick futuristic sunglasses to her look, as well as silver earrings. To complete the outfit, Kardashian carried a motorcycle helmet-shaped bag by Balenciaga. Her purse featured a top handle and a hard shell that kept its shape. The bag also included silver details and shiny black features as well.

For shoes, the media star stuck with what she knows; a sock boot. She wore a black pair with a pointy toe and a thin heel that reached at least 3 inches in height. The boots fit in seamlessly with the rest of the look.

When it comes to fashion, Kardashian is known for having a trendy and daring sartorial sense. She tends to gravitate towards pointed-toe boots and edgy silhouettes that stay true to her aesthetic. The media personality has made her mark in the fashion industry by creating her own Skims line that focuses on loungewear and shapewear with functionality in mind. She has also starred in campaigns and runway shows for Balenciaga, Balmain and Fendi. Most recently, she has been tapped by Stuart Weitzman to star in their latest campaign.

PHOTOS: Click through the gallery for more of Kardashian’s boldest looks over the years.