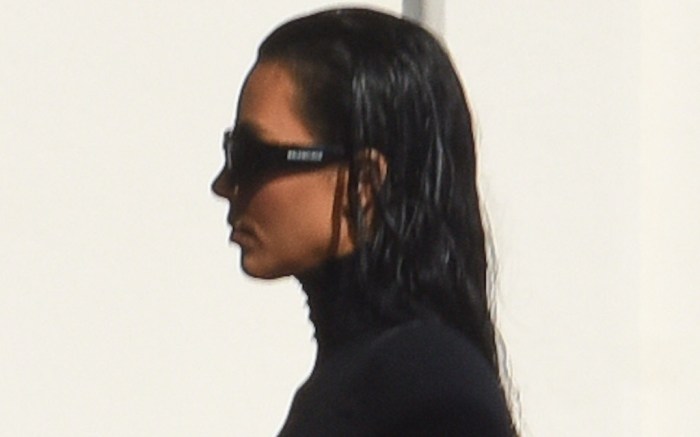 The “Kardashians” star left the City of Lights after Balenciaga’s fall ’22 fashion show in a sleek black bodycon dress by the French fashion brand. The number appeared to feature a turtleneck silhouette, long sleeves and a maxi skirt that ended near Kardashian’s ankles. Her look gained added drama from a bright orange feather boa, as well as black logo-accented sunglasses.

When it came to shoes, Kardashian appeared to stick to one of her now-signature styles: pointed-toe boots. While it wasn’t clear if the silhouette was a thigh-high, over-the-knee or pantaboot style, or attached to a matching bodysuit — similar to those Kardashian has worn throughout the last several months — the pair did feature Balenciaga’s signature “Knife”-style pointed toes with stiletto heels totaling at least 3 inches in height. The style further streamlined Kardashian’s outfit, bringing it a slick finish.

Pointed-toe boots are a year-round wardrobe staple. Knee, over-the-knee and thigh-high pairs rising in popularity at the moment due to their streamlining abilities and higher coverage, like pairs seen on runways for The Blonds, Isabel Marant and Saint Laurent during Fashion Month this year. Aside from Kardashian, stars like Julia Fox, Elsa Hosk and Kacey Musgraves have worn similar pairs of Diesel, Magda Butrym and Stella McCartney boots in recent weeks as well.

The former “Keeping Up With the Kardashians” star is known for wearing bold outfits, such as see-through leggings and mesh dresses. These are often styled with pieces in coordinating hues from top brands including Balmain, Maison Margiela and Mugler. Her shoes are often trend-based and daring, ranging from sleek Balenciaga boot pants to Yeezy sneakers. She’s also been seen in vintage sandals, boots and pumps from Prada, Manolo Blahnik and others over the years.