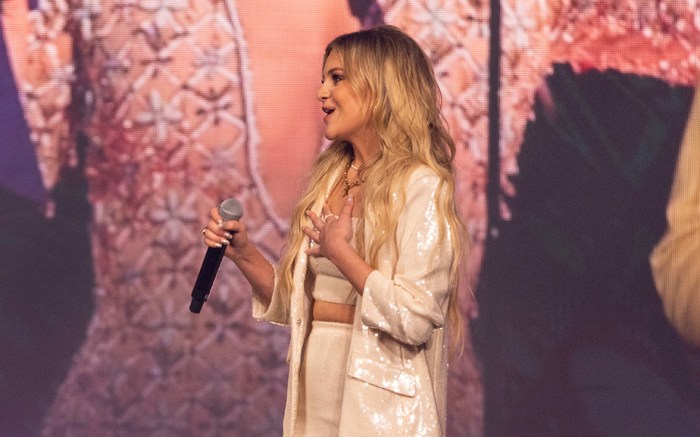 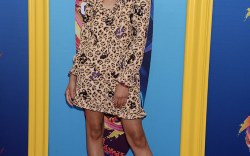 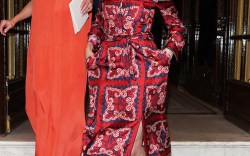 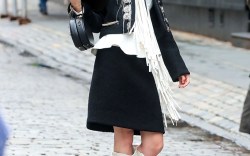 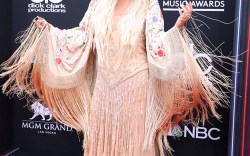 The “Peter Pan” singer made a surprise appearance during the Austin leg of Carrie Underwood’s “Denim & Rhinestones” tour at Moody Center. They announced the 2023 Country Music Television Awards’ location. The show will broadcast live from the same area on Apr. 2 next year, with Ballerini co-hosting for the third time in a row.

While on stage, Ballerini wore a shimmery look. Her outfit featured a matching bandeau top, and a miniskirt decorated with shiny sequins.

She paired the coordinating set with an identically designed blazer in the same hue, which featured a single flap pocket on each side and sparkling embellishments.

Ballerini completed her ensemble with a sparkling gold necklace and a gold chain composed style worn just below that entailed a ‘K’ pendant representing the first initial in her first name. She added shimmery gold hoops and rings and opted for glittery nail polish.

When it came to footwear, the “Miss Me More” singer opted for a glossy style reflective of her outfit’s radiant theme. She wore a pair of metallic boots that incorporated a cowboy design with its upwardly curved vamp, piping, crown, and pull straps. The shoe also comprised a mirror-like toebox and sculpted mid-heel.

Footwear-wise, it seems as though Ballerini has integrated several recurring styles as part of her wardrobe. From boots to heels and wedges, she has stepped out in an assortment of these designs that echo her current outfit choice.

At the 2022 Country Music Television Artists of the Year event last month, she wore a pair of nude-toned sandals that fused a sharp toe box, strapped composition wrapped around her ankles, and high heels with a bright yellow gown. For her performance during the Academy of Country Music Awards in August, she coupled a pair of heeled, rhinestone-embellished black boots with a bandeau mini dress and tassel-adorned opera gloves in the same color.