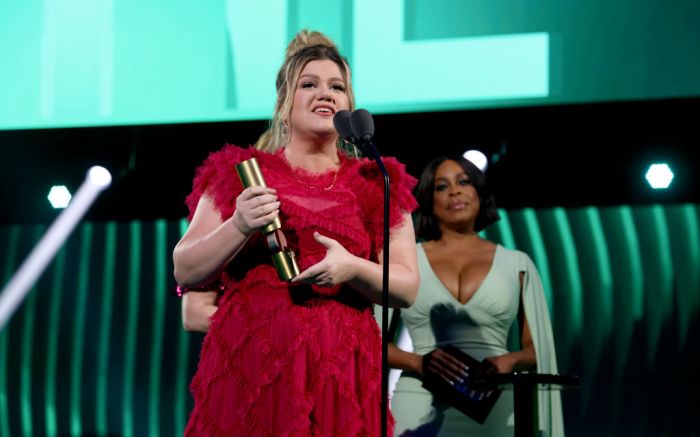 Kelly Clarkson stepped out in a vibrant attire at the People’s Choice Awards in Santa Monica, Calif., on Dec. 6. The “American Idol” winner was joined by her daughter, Riley Rose Blackstock, as she received the award for The Daytime Talk Show of 2022 for her namesake program.

The “Since You Been Gone” singer wore a red gown that featured a zig zag ruffled look. The vibrant dress was made up of a polka dot mesh material.

Clarkson accessorized with a pair of diamond teardrop earrings and a thin gold linked chain.

The daytime talk show host’s footwear was hidden by her ruffled gown. She admitted that she eschewed a pair of heels for the event — joking that at 5-foot-3 she struggled to reach the microphone without height-boosting footwear.

She most likely slipped into a pair of vibrant boots or classic flats. Throughout her long and successful career, Clarkson has been seen in a variety of styles from bohemian to edgy. The “Stronger” singer gravitates towards ankle boots or trendy kitten heels from designer labels like Stella McCartney, Saint Laurent and Saint Laurent. If she is attending a red carpet event like this one, the former “Voice” judge often slips into sparkling pointed-toe pumps or embellished sandals from brands like Amina Muaddi, Bottega Veneta, and Balmain.

Clarkson kept her honey blond locks in an updo style with two face framing pieces that brought attention to her minimal makeup that featured a glistening eye look and a nude pink lip.