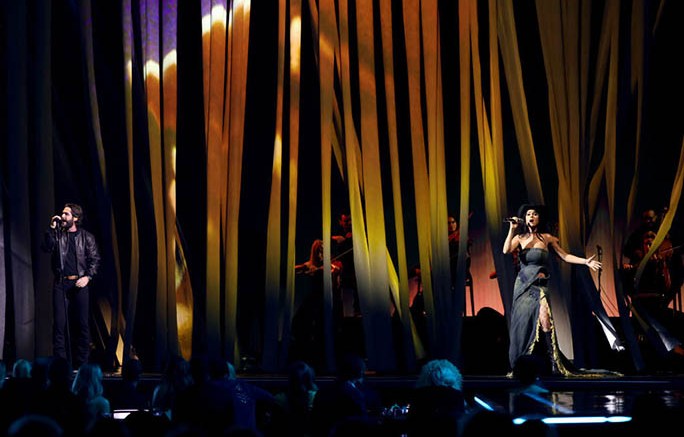 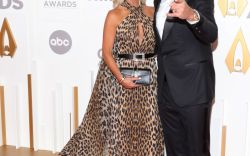 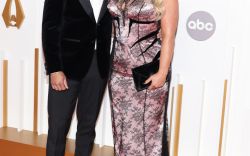 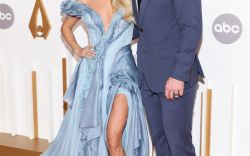 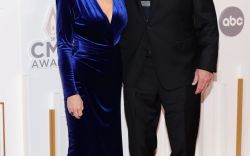 Katy Perry made her CMA Awards debut onstage with Thomas Rhett. The singer’s brought down the house with their pop-country collaboration, “Where We Started,” at tonight’s star-studded show in Nashville, Tenn.

Perry pulled out a show-stopping look for her performance at the Bridgestone Arena. Her outfit offered a Y2K feel as she wore a dramatic acid-wash denim dress. The strapless piece had a large circle cutout on the hip and featured a thigh-high split that was outlined with yellow fringe details.

Perry complemented her wardrobe with fishnet tights and a black cowgirl hat. To further elevate the moment, the “Dark Horse” hitmaker accessorized with a choker necklace and let her long tresses cascade on her shoulders.

When it came down to the shoes, Perry completed her look with black knee-high boots. Popularized in the ‘60 go-go era, knee-high boots leave the wearer’s knee exposed, but cover the calves. Often worn with skirts, the style is a wise choice in fall and winter for protecting the leg from the elements while still allowing the wearer to show some leg.

Rhett opted for all-black attire as he joined Perry for the duet. The “Half of Me” artist donned a leather jacket with black pants and tan Chelsea boots.

The 2022 CMA Awards will honor the top performers and songs in the country music genre. Held at Bridgestone Arena in Nashville, this year’s ceremony will be hosted by Peyton Manning and Luke Bryan. The evening will notably include performances by Carrie Underwood, Miranda Lambert and Reba McEntire, as well as Luke Combs, Cole Swindell and Morgan Wallen.

PHOTOS: Discover more celebrity arrivals on the red carpet at the 2022 CMA Awards.