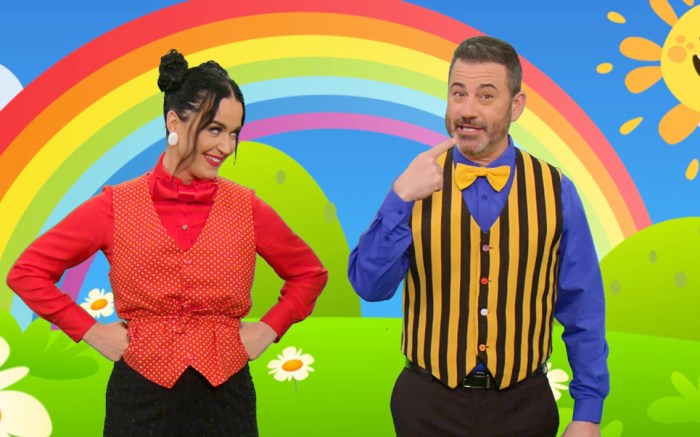 Katy Perry and Jimmy Kimmel have joined forces to write the next most popular children song of all time.

During an appearance on “Jimmy Kimmel Live!” the “Teenage Dream” singer sat down with the talk show host in a recording studio in hopes of creating a children’s song that’s even catchier and more annoying than “Baby Shark,” which first went viral on YouTube in 2016 and has since become the platform’s most-watched video with over 10 billion views.

Following a discussion about the eating habits of their children, the duo settles on a song titled, “Yum Yum Nom Nom Toot Toot Poop.” In the studio, Perry opted for an ultra-chic brown ensemble. Her outfit consisted of a long-sleeve crop top that had a plunging V-neckline. She paired the short garment with matching flare leg pants. The award-winning songwriter grounded things with black open-toe mules. The leather silhouette had a square outsole and a sharp stiletto heel.

The clip then transitions to a half-animated music video reminiscent of “Baby Shark,” while Kimmel and Perry sing the lyrics. Perry swapped her stylish two-piece set for a vibrant outfit that was suitable for the song. The “Hot n’ Cold” hitmaker sported a red polka dot vest, which she paired with a collard shirt. She teamed the top with black slacks and accessorized with white earrings and a bow tie. The angle of the video allowed for a peak her footwear choice, which appeared to be a black silhouette.

When it comes to footwear, Perry’s style is bold and sleek. She’s previously been seen in pointed-toe pumps, flats, and mules by labels like Louis Vuitton, Bottega Veneta and Manolo Blahnik. When off-duty, the star prefers comfortable sneakers and slides by Adidas, Saint Laurent and Birkenstock. She also wears her own line of Katy Perry Collection shoes, which feature statement-making sandals, pumps and flats with sparkly embellishments and bold colors.

Click through the gallery to see more of Katy Perry’s chic street style over the years.