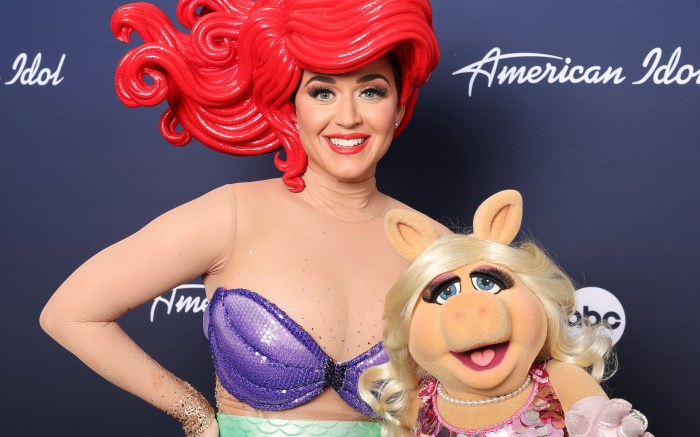 Katy Perry is the queen of camp for “American Idol.”

The pop singer and judge on showed up to the show in as the character Ariel from “The Little Mermaid” alongside Miss Piggy. Perry wore a purple seashell bra top that was laid over a flesh-tone long-sleeve shirt decorated with sequins at the hem. The top was a high neck mesh and covered up most of the pop star’s arms and bodice except for her hands.

The star wore an aqua-colored mermaid tail complete with scales. The bottoms were high-waisted and also had a slight sheen to the fabric. Perry wore a sculpted red wig, seemingly made out of some sort of plastic.

The shiny wig sat atop the singer’s hair like a hat and was swept to the side as if it were windblown. Perry finished off the look with a wash of color on her lids, rhinestones under her eyes, and a bold red lip to match the hair.

The entertainer does the Disney princess well, not only with her talented singing but with excellent costuming as well. The tail must be a challenge but Perry worked it as best as possible. She did, however, manage to fall out of her chair thanks to the interesting costume. The ensemble is unconventional, recalling the whimsicality of the chandelier look for the Met or her burger dress for the afterparty. The star is one for drama, and this outfit proves that.

While the tail blocks off the view of what shoes the pop star could be wearing, we’d hope she’d worn sneakers or a flat of some sort to aid in mobility. The shoes should be comfortable without a heel so the singer won’t trip on her precious tail. Keds or a simple canvas shoe would do nicely.

When she’s not behind the “American Idol” judges’ table or behind the microphone, Perry has her namesake shoe line that sells silhouettes like pumps, sandals and flats. She launched her collection in 2016 as a joint venture with Global Brands Group Holding Ltd. and revealed in an interview with Footwear News that she has taken ownership of Katy Perry Collection after Global Brands Group filed for bankruptcy in July last year.