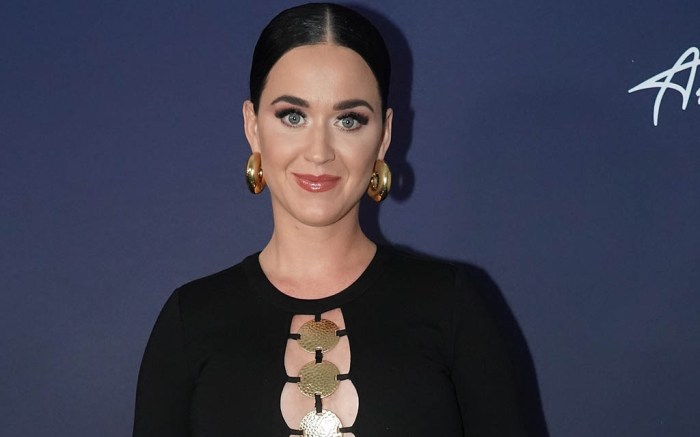 Katy Perry has her work cut out for her judging Season 20 of “American Idol,” but she’s taking on her fifth season at the judge’s table with impeccable style. Perry recently wore a sleek little black dress by Staud along with some unexpected golden accents for the April 25 episode of the popular series, but even a serious style moment couldn’t save Perry from an awkward conversation that took her down for the count.

For the latest “Idol” episode, Perry wore a long-sleeve black dress that hit just at her ankles, giving a peek at her simple black sandal pumps. Gilded disc accents secured along a cutout down the middle of the bodice and around the empire waist added some pizzazz to the otherwise simple LBD. Perry’s dress also featured a daring thigh-high slit, which gave movement to the floor-length column skirt.

While her footwear brand wasn’t easy to spot, Perry has her namesake shoe line that sells silhouettes like pumps, sandals and flats. She launched her namesake collection in 2016 as a joint venture with Global Brands Group Holding Ltd. and revealed in an interview with Footwear News that she has taken ownership of Katy Perry Collection after Global Brands Group filed for bankruptcy in July last year.

For accessories, Perry wore chunky gold hoops and a gold statement ring. Perry wore her hair pulled into a sleek low ponytail with a middle part, centering her makeup look on full, bold lashes and a coral glossy lips.

For this week’s episode, each contestant had to pick from three songs selected by each of the three “Idol” judges. After performing their choice, the contestant was tasked with guessing which judge — Perry, Lionel Richie, or Luke Bryan — picked the number.

Perry had to dodge an awkward moment during the show when a contestant suggested she selected John Mayer’s 2009 hit “Heartbreak Warfare” for his performance. Perry, who famously dated Mayer for a handful of years in the early 2010s, responded to the guess by joking, “I feel like maybe you should Wikipedia me.” She added, “It’s all a great song, you did great, but I can’t talk anymore.” The star then slinked under the judge’s table, but not before joking, “Who’s going to pay for my extra hour of therapy?”