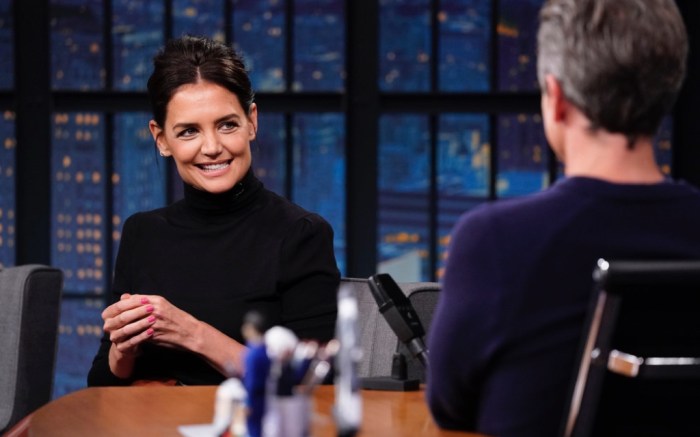 The actress appeared on “Late Night with Seth Meyers” on Wednesday night. She joined Meyers to discuss her upcoming film “Alone Together,” directing the film and snooping around NYC movie sets.

While on the late-night show, Holmes paired a black turtleneck long sleeve top with a brown leather skirt. Each of the timeless pieces came from Chloé, one of Holmes’ most-worn designers. Earlier this year, the “Dawson’s Creek” alum hit the Vanity Fair Oscars Party in a black gown from Chloé that was custom-made by Gabriela Hearst. The dress featured cutout detailing on the rib cage, an off-the-shoulder cut and metal ring detail on the bust.

Holmes added black pumps to round out her look. Her classic pumps featured a pointed toe and a thin heel that added at least four inches to Holmes’ height. The shoes added to the overall timelessness of the ensemble without look stuffy.

Add a classic pair of pointy pumps to your wardrobe.

See more of Holmes’ best street style moments over the years in this gallery.