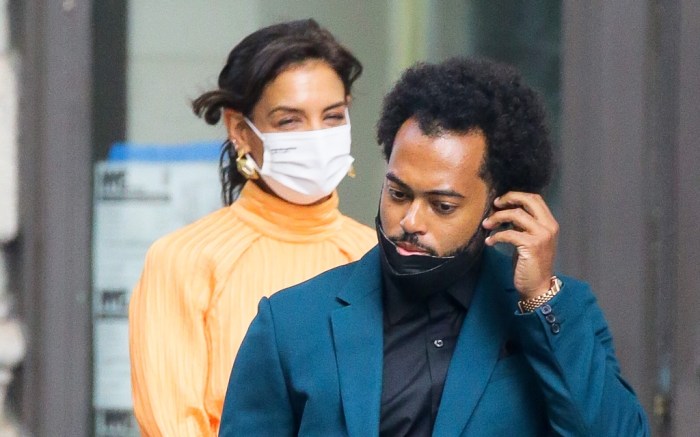 Katie Holmes and her boyfriend stepped out in style.

The “Dawson’s Creek” alum and her boyfriend, musician Bobby Wooten III, were seen in NYC on Friday. The two were heading to Moth Ball’s 25th Anniversary Gala, where they made their red carpet debut as a couple. For the event, Holmes wore a light orange midi dress with a vertical striped stitching design, mock-neck and cinched waist. She added drop earrings and carried a gold and black clutch bag.

Holmes and Wooten in NYC on May 27.

The actress wore a pair of black strappy heels with her dress. Her heels featured a gold band across the big toe plus two black straps across the entire foot, matching her gold and black bag perfectly. The thin stiletto heels added at least 3 inches to Holmes’ frame.

Wooten wore a sharp dark green suit for the occasion. He added a black button-down shirt under his jacket and accessorized with a watch. He finished off his look with a pair of classic black leather dress shoes.

When it comes to fashion, Holmes is known for her classic style, often re-wearing beloved pieces year-round. As for footwear, she keeps a timeless selection of Adidas sneakers, Gucci loafers and Bottega Veneta mules in rotation.  Over the years, Holmes has made a name for herself within the fashion industry. She starred in campaigns for J. Crew, Ann Taylor and Miu Miu. Recently, the actress hit the Vanity Fair Oscars Party in a black gown from Chloe that was custom made by Gabriela Hearst. he dress featured cutout detailing on the rib cage, an off-the-shoulder cut and metal ring detail on the bust.

See more of Holmes’ best street style moments over the years in this gallery.