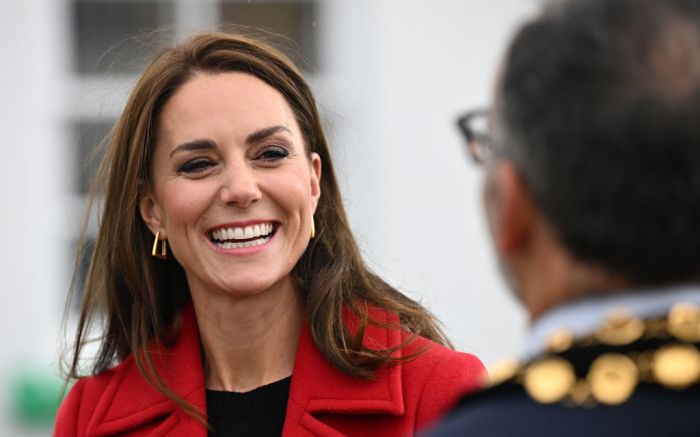 Kate Middleton and her husband, Prince William, visited Wales for the first time as Prince and Princess of Wales today. The two started in Anglesey, in the northwest of Wales, before heading to RNLI Holyhead Lifeboat Station to meet crew members, volunteers and some of those who have been helped by their local unit.

While visiting the country, Middleton wore a bright red coat from LK Bennett. Her wool-blend jacket featured gold button closures as well as detailing on the sleeves. The red coat could be a tribute to the late Princess Diana, who also wore red during her first official visit to Wales when she became the Princess of Wales in 1981.

This is the first time Middleton is seen wearing vibrant colors in public since Queen Elizabeth II‘s funeral. The Royal Family released a statement this Tuesday announcing the period of royal mourning following the death of Queen Elizabeth II has ended.

Middleton added black trousers to the look, as well as a black top, letting her coat serve as the focal point. She added gold rectangle hoop earrings and carried a black top-handle leather bag from Grace Han.

Middleton chose one of her signature shoe styles to complete the outfit: pointed pumps. She donned a black pair with a thick, block heel. Middleton wears pointed-toe pumps so often they’ve become a well-known style that she frequently sources from Emmy London, Jimmy Choo and Stuart Weitzman.

Her go-to style is Gianvito Rossi’s 105 pumps, which she owns in five colors. In addition to her royal rotation of heels, the duchess also wears affordable sneakers from New Balance, Adidas, Superga and Zara on and off-duty.