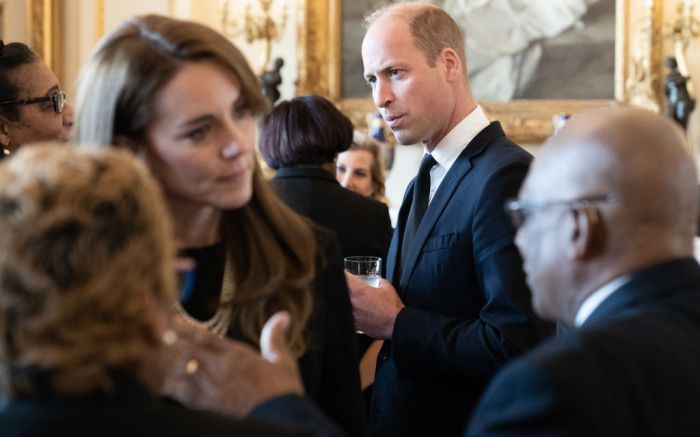 Kate Middleton and her husband Prince William sat down for lunch held for the governor-general of the Commonwealth nations at Buckingham Palace today in London. The couple honored traditional mourning dress and continued to wear all black. Many members of the royal family joined the pair for the meal, including Queen Consort Camilla.

This was not the first time that Middleton used jewelry to honor Queen Elizabeth II. While visiting the troops at the Army Training Centre Pirbright yesterday in Wales, she was seen wearing Queen Elizabeth II’s pearl and diamond earrings.

Wearing pearls is part of the mourning tradition in the UK that dates to the 19th century. White pearls are considered to denote purity and represent tears. In 1878, to mourn the loss of both her daughter Princess Alice and son Prince Albert, Queen Victoria wore brooches with their initials and a single white pearl.

William joined his wife in a black two-piece suit that he wore with a crisp white button-up top and a black tie. The Prince accompanied the outfit with black shiny dress shoes.