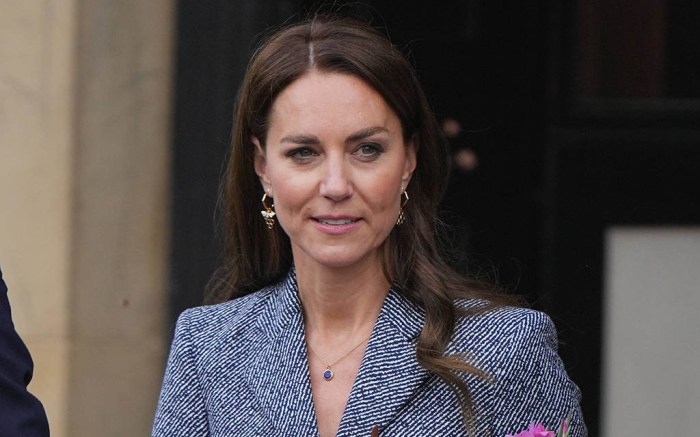 Prince William and Kate Middleton made a poignant trip to Manchester, England today.

The Duke and Duchess of Cambridge traveled to the city to honor the victims of the terrorist attack at Manchester Arena during an Ariana Grande concert in 2017. The royal couple attended the official opening of the Glade of Light memorial for the people who were killed or injured in the suicide bombing.

Middleton was elegantly dressed for the outing. The glamorous mother-of-three wore a speckled coat dress by Michael Kors Collection. The statement piece is from the label’s Spring 2014 collection. The indigo twill jacquard coat has a front button closure, lapel collars, flap pockets at the hip and a flared skirt. Middleton initially wore the dress during her first royal tour of Australia in 2014.

Middleton gave a touching nod to the city by wearing a set of dainty earrings, which featured a bee, an emblem of Manchester. She styled her hair in soft curls and kept things simple with minimal makeup.

When it came down to footwear, Middleton grounded things with her favorite go-to shoe style — pointed-toe pumps. The slip-on silhouette remains as one of the most popular shoe styles as it matches a variety of looks easily, while the suede construction proves both luxe and durable.

Prince William wore a navy blue suit that he paired with a white collard shirt, blue tie and leather shoes.

Middleton has been seen smartly dressed while fulfilling her duties. During the recent royal Caribbean tour, she attended events in a range of dresses and shoes, always making the appropriate statement. Beyond designer pieces, she loops in wallet-friendly styles by New Balance, Zara, Marks & Spencer, Adidas and Superga. The royal keeps pumps from Jimmy Choo, Stuart Weitzman, Emmy London and Gianvito Rossi in rotation.

Click through to see more of Middleton’s shoe style through the years.