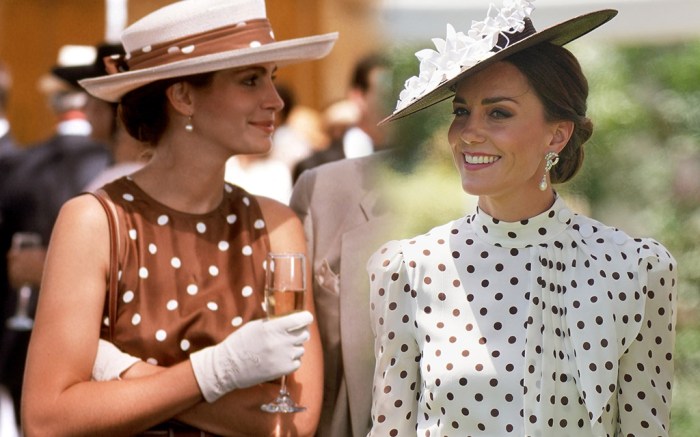 Kate Middleton is a fan of the style classics, a necessity (and expectation) as a high-profile royal. For her latest appearance at the annual Royal Ascot on June 17 in Berkshire, UK, Middleton dipped into her closet for two of her go-to style staples: polka dots and Gianvito Rossi heels.

The pointed suede heels are a favorite of Middleton, with the royal often seen wearing the heel style in several different colors. In fact, she was seen in the same shoe style in a pink colorway the previous day at a Royal Foundation Centre for Early Childhood event, where she debuted a bubblegum pink power suit.

For accessories, Middleton wore a brown straw hat with decorated with white flowers, placing the fascinator slightly askew on her head. The duchess wore a pair of diamond and pearl drop earrings that once belonged to Princess Diana, showing off the statement jewelry by pulling her brown locks back into a low chignon. For makeup, Middleton wore a pale pink lip and a coordinating brown eyeshadow look.

She attended the event with Prince William, who looked royally dapper in a black jacket, gray pants, a pale blue double-breasted vest and a black top hat.

Some fans notably compared Middleton’s look to Julia Robert’s famous polka dot dress from the 1990 film “Pretty Woman,” which features the star wearing a brown dress with white polka dots and a white straw hat to a polo match.

Middleton is often seen wearing polka dot pieces, donning the chic and classic print to a wide variety of events. The royal wore the pattern to another sporting event within the last year, attending Wimbledon 2021 in a navy and white polka dot skirt. Middleton also wore a black and white polka dot dress to attend a March 2022 memorial service honoring Prince Phillip after his death a year earlier. Back in March 2020, Middleton famously wore three polka dot dresses in a row while in Ireland.

See More of Kate Middleton’s Classic Style Through the Years