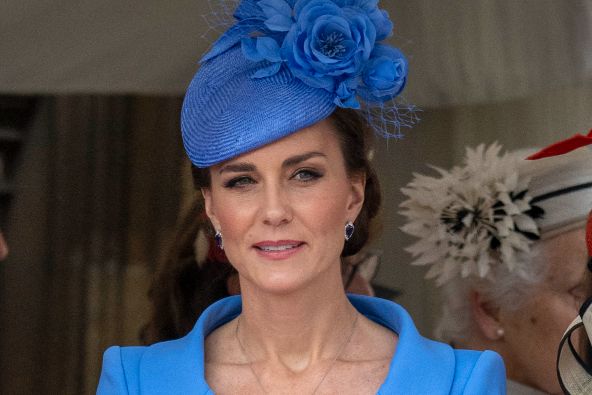 Kate Middleton attended The Order of the Garter Service in a typically chic monochromatic ensemble today in London.

The Duchess of Cambridge wore a dashing all-blue look to St Georges Chapel, which also included Prince William and Sophie Countess of Wessex.

The duchess wore a bright blue coat dress by Catherine Walker with pointed shoulders with a wide, collared neckline. The sharp, squared-off shoulders give the top half of the ensemble a commanding look. The top was tucked into a pleated A-line skirt in the same shade of blue.

To offset the light blue, Middleton also wore a dark blue fascinator that sat atop her head at an angle, adorned with deep blue flowers. Middleton also carried a large deep blue square clutch with a scalloped edge in the same color as the hat. Middleton finished the look off with silver and dark blue jewelry around her neck and on her finger.

As for footwear, the duchess adorned her feet in dark blue Aquazzura Love Link Sling heels with a bedazzled sling back. The shoes were a deep blue much like her clutch, jewelry, and hat. The prominent pointed heels were finished with a silver detail across the back. The silver in the heel mirrors the silver present in her opulent jewelry, creating a cohesive ensemble. Each detail in the look mimics another detail, every well-thought piece playing off one another in a beautiful and regal fashion.

The Order of The Garter Service is an order of chivalry founded by Edward III of England in 1348. It is the most senior order of knighthood in the British honors system, outranked in precedence only by the Victoria Cross and the George Cross. The tradition is a yearly one, bringing together a large portion of the royal family annually.

Click through the gallery to see more of Kate Middleton’s most stellar shoe moments.