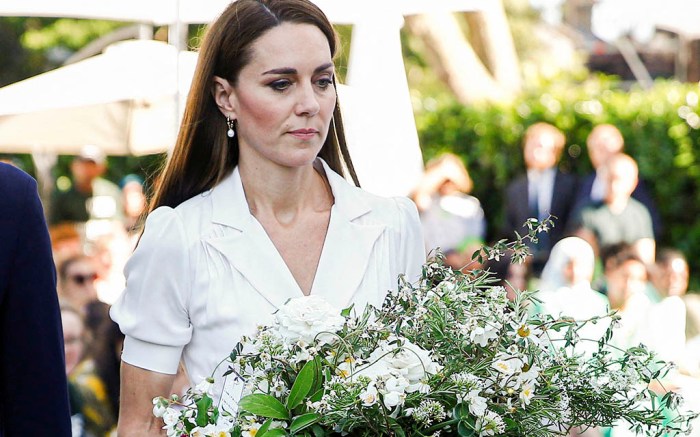 Kate Middleton made a public appearance today with Prince William, attending a memorial ceremony for those who died in the 2017 Grenfell Tower fire in London. The memorial, which took place at the fire site, marked five years since the tragedy, leading Middleton to choose a timeless dress for the somber and reflective occasion.

For the event, Middleton wore a white Suzannah London dress with black buttons down the front, puffed elbow-length sleeves, and a flowing skirt. The dress featured a statement lapel-like collar and was cinched around the waist with a coordinating white belt. The royal has worn the classic dress before, including to Wimbledon in 2019 and during a UK charity visit in 2020.

She paired the dress with white pointed slingback heels by Alessandra Rich with a statement color-blocked black toe. The shoes featured a modest 3-inch heel and an accent strap across the top of the foot.

Middleton carried a simple white clutch during the event, wearing a pair of pearl drop earrings as her only jewelry. She wore her long brown locks down, favoring her signature natural makeup and blushed cheeks.

The memorial marked five years since the devastating and deadly fire at the London high-rise tower. Seventy-two people died in the blaze, with more than 70 others injured in the fire. A total of 223 people are reported to have escaped the blaze. The fire was one of the worst residential fires in the United Kingdom since World War II.

At the memorial, Middleton and Prince William placed a wreath at the base of the tower, sitting for a 72-second moment of silence in acknowledgment of the 72 people killed in the blaze.

Grenfell Tower still stands in London, though it hasn’t been inhabitable since the 2017 fire. The structure is currently wrapped to preserve forensic evidence, as it has been for five years since the blaze. It’s expected that the community will soon demolish the building to make way for an official public memorial, pending the completion of ongoing investigations by police, the public, and the corner.