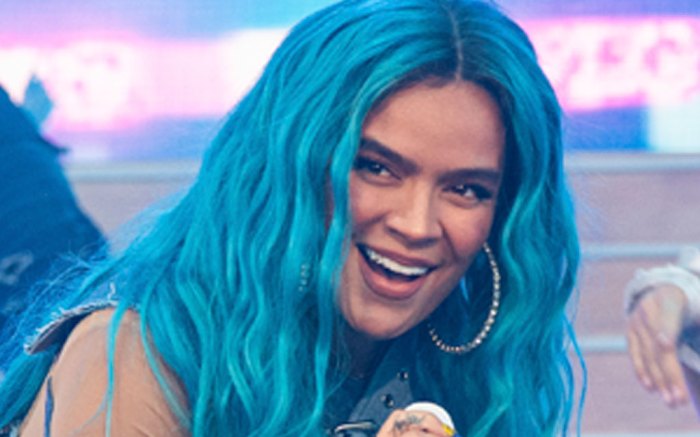 Karol G brought a colorful flair to the Coachella Music Festival stage while performing a tribute to the late singer Selena.

The Colombian singer came out clad in multicolored clothing for her first-ever Coachella appearance on Sunday in Indio, Calif. The musician paid tribute to Latin artists whose songs have hit number one but have not performed at Coachella. She sang the late Mexican-American singer Selena’s 1992 song “Como La Flor” while wearing an outfit inspired by the Colombian flag. The ensemble featured an asymmetrical one-shoulder top that wrapped around her body as well as matching fingerless gloves. The 31-year-old also wore wide-leg pants with an ombre yellow top and red seams that transitioned into a blue hue at the knees.

During another part of her performance, the “Don’t Be Shy” singer commanded the stage in a denim leotard with overlapping buckle detailing that also ran down her arms. She accessorized with a pair of large silver hoop earrings. When it came to footwear, she sported a pair of matching knee-high boots with overlapping denim detail sewn together as well as a rubber white bottom that featured a thick sole and chunky high heel.

The star was joined on the stage by fellow musician Becky G, who wore a white cutoff cropped top layered over a red leather bralette. On the bottom, she sported a pair of black cargo pants with red and white stripes as well as matching sneakers. She also wore large hoop earrings as well as layered chain necklaces and thick bracelets. The duo performed their hit song “MAMIII.”

The star-studded festival featured a boldface lineup for the first weekend. Performers included Billie Eilish and Harry Styles, both of whom took to the stage in iconic ensembles. Eilish wore a pair of the PSNY x Nike Air Force 1s in white. With this collaboration, according to Nike, Dao-Yi Chow and Maxwell Osborne of Public School created a look after four hours of stapling and gluing that combined pieces of a white Low, Mid and High versions of the iconic sneaker.

Styles went for a more flashy look for his performance. He sported a sequined one-piece suit with a plunging neckline. On his feet, Styles opted for a pair of shiny black boots that gave him great mobility to bounce around the stage. The shoes had patent leather uppers and an almond-toe shape.