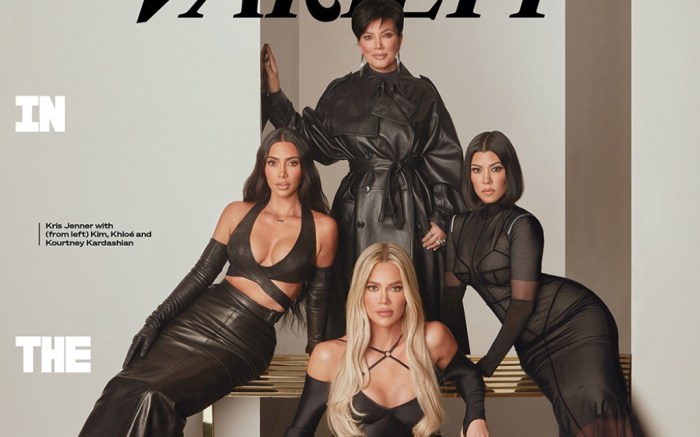 Right before their new reality show hits Hulu, the Kardashians appeared on the cover of the latest Variety magazine.

Matriarch Kris Jenner and three of her daughters Kim, Kourtney and Khloe all posed for the cover and opened up in an exclusive interview. The four businesswomen talked to Variety about their mega-deal move to Hulu from E!, and what fans will and won’t see on the new show. They also reveal when they might leave reality TV behind, and more. For the shoot, the women wore black outfits. Kim went with a leather crop top, midi skirt and dramatic gloves paired with black leather boots. Kris also donned leather with a black coat. Khloe wore a modern black bodysuit and Kourtney wore a sheer corset dress with clear heels.

Below are some of the quotes from the interview, but you can read the entire article here.

Kris on the beginning of “Keeping Up With the Kardashians”: “It really wasn’t this master plan. When I started ‘Keeping Up With the Kardashians,’ we were so excited to have our own show and so appreciative of the opportunity […] I remember thinking we were going to be filming in the children’s clothing store that Kourtney and I owned. It kind of started out like, ‘Oh, my goodness, we’re going to sell a lot of baby clothes!’”

Kris on why the family decided to keep going with another show on a different network: “Well, money always matters. I think that anybody would be foolish to say that money doesn’t matter anymore.”

Kim on whether or not fans will see her new boyfriend, Pete Davidson, in Hulu’s “The Kardashians”: “I have not filmed with him. And I’m not opposed to it. It’s just not what he does,” she said, speaking about Davidson for the first time publicly. “But if there was an event happening and he was there, he wouldn’t tell the cameras to get away. I think I might film something really exciting coming, but it wouldn’t be for this season.”

Kim said that when the new show premieres, viewers will see “how we met and who reached out to who and how it happened and all the details that everyone wants to know. I’m definitely open to talking, and I definitely explain it.”

Kim on criticism that she’s “just famous for being famous”: “Who gives a f—k. We focus on the positive. We work our asses off. If that’s what you think, then sorry. We just don’t have the energy for that. We don’t have to sing or dance or act; we get to live our lives — and hey, we made it. I don’t know what to tell you.”

Kourtney on where she sees herself in five years: “I see myself living in another city. I don’t think I see myself filming on a show in five years. I would probably envision myself, like, just living.”

Khloe on moving to a streamer: “We wanted to be with someone that’s tech forward, so we’re with the times. For us to be still on cable was just not so on brand for us.”

Khloe on pulling back the curtain on her relationship with Tristan Thompson on “The Kardashians”: “I wish I never had to talk about that because it’s not a fun thing to talk about. But it is part of my journey in life, so we will see it on the show.”