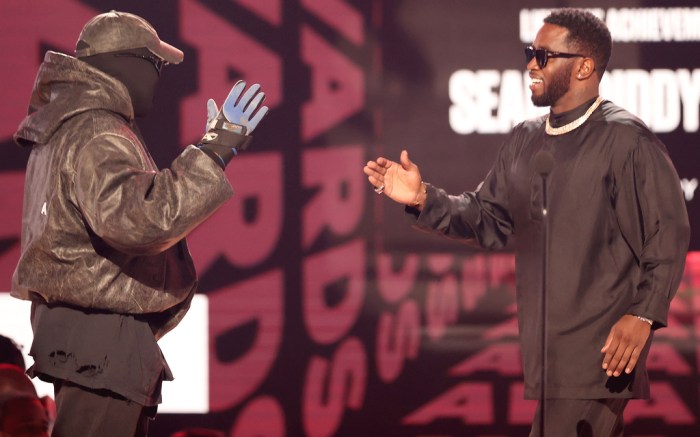 It was an astonishing picture, Kanye West took the stage on Sunday in Los Angeles at the BET Awards fully concealed and in a “Hood by Air” jacket as he introduced Sean “Diddy” Combs before presenting him with the Lifetime Achievement Award. He stood in front of the crowd recalling the potent memories of his teenage rap career with Diddy. West shared that he remembered adding Bad Boys shakers to his beats and interluding the original version of “It’s All About the Benjamins” during his studio sessions.

This was Kanye’s first major appearance since a long list of concerts and stadium-sized listening sessions for “Donda” last year.

Kanye jump-started his speech by acknowledging his affinity for Diddy.

“I was signed to Puff without him knowing,” Ye said.

The mogul’s wide array of talents was one of many things that prompted Diddy as Kanye’s favorite artist, Ye said as he remarked on Combs’ success as an entrepreneur and businessman.

“Favorite….Everything. Not specifically production. The drip…,” Kanye said. “You know, back then there were so many rules to hip hop. And he broke all of them.”

Dressed in a mask and sunglasses that veiled his face, Ye said he still goes to Diddy for advice to this day.

“He inspires so many of my choices. So many of my life choices, my wife choices,” he continued, referencing that both he and Combs were in high profile relationships with women named Kim (West divorced Kim Kardashian last March and Diddy’s longtime partner Kim Porter died in 2018).

Later in his speech, Ye made a brief reference of a career break in the past, mentioning that he wanted to “declare myself legally dead for a year,” in comparison to Puff’s persistence.

“Any of us in this room. If Puff ever needs us, we need to jump and be there,” Ye said.

The BET Awards celebrate the achievements of musicians, actors, athletes and more throughout various entertainment fields. The first BET Awards took place in 2001 to celebrate Black culture and Black excellence. Taraji P. Henson is the host of this year’s show with performances by Lizzo, Mary J Blige, Latto and Jack Harlow. Leading nominations include Doja Cat with six nods, Ari Lennox and Drake with four nods each.