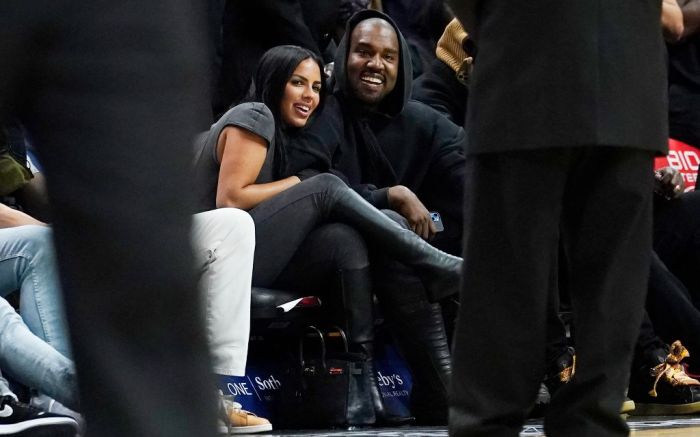 It was fun night out for Kanye West and Chaney Jones. The pair was all smiles as they watched Miami Heat take on the Minnesota Timberwolves at the FTX arena in Miami on Saturday. The rapper and influencer gave a masterclass in casual fashion as they sat courtside in some fashionable outfits. The new photos come a day after the duo was spotted at the Los Angeles Lakers vs. Washington Wizards basketball game.

For the outing, West sported a black hoodie and jeans. He continued with a monochromatic aesthetic by finishing off his look with tall black rubber boots. The slip-on style featured raised treads on the of the shoes for maximum grip and support and tactile accents.

Jones followed in his footsteps by also opting for a dark outfit. She wore a short-sleeve charcoal T-shirt. She paired the acid wash top with dark skinny jeans. Jones accessorized with a small black Hermes Birkin bag and black gloves. When it came down to footwear, she slipped into a pair of sleek knee-length leather boots. The pointed-toe silhouette was complete with a think heel and slouchy details.

When it comes to fashion and footwear, West is known for his work with Yeezy and iconic collaborations with Gap and Nike. As of lately, he has been tying his looks together with boots. He initially kicked off the rubber boots trend when he attended a Los Angeles Lakers basketball game in November. The “Donda” rapper wore Yeezy Insulated Boot in a gray colorway. He styled up the statement shoes with with a puffy leather jacket, dark gray hoodie, denim jeans and gloves.