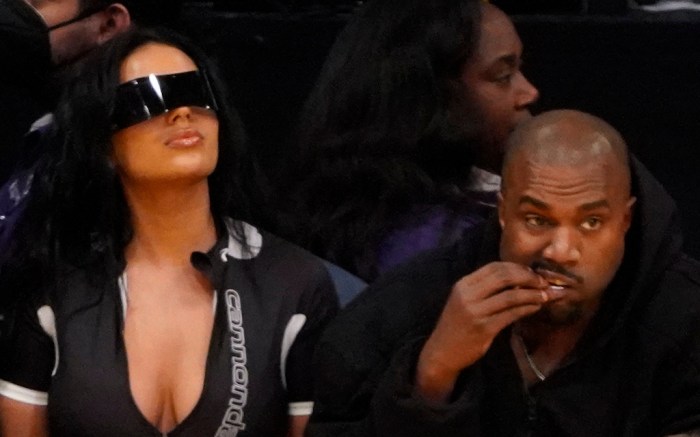 Kanye West and Chaney Jones continue to show how chic monochromatic dressing can be.

The “Flashing Lights” rapper and his rumored girlfriend, Chaney Jones, attended the Los Angeles Lakers vs. Washington Wizards basketball game on Friday, where the two decided to go toned-down while watching in floor seats.

West went with a pair of tall black rubber boots that featured raised treads on the of the shoes for maximum grip and support. Also, the boots had tactile accents on the front that gave them a futuristic look.

As for Chaney, she slipped on a pair of knee-high black leather boots that blended in with her attire. The shoes had a pointed-toe style and had a heel height of approximately 3 inches.

Ye coordinated the footwear with a baggy black hoodie and black jeans for a refined appearance that plays with textures.

Chaney went with a black plunging short-sleeve scuba top from Cannondale that had a touch of white throughout the garment. On the lower half, she wore a pair of black latex tights for an edgy finish.

When it comes to accessories, Chaney teamed her ensemble with black gloves and sleek rectangular sunglasses.

West is known for his Yeezy clothing line that permeated streetwear culture with his popular sneakers and his cutting-edge clothing that are now a trendy aesthetic within the fashion industry. For instance, his affinity for boxy hoodies pierced through his Gap x Yeezy x Balenciaga collection drop, which also included T-shirts and denim jackets that all follow the same design codes. As of late, he has also shown his love for tall black rubber boots from brands like Red Wing and Black Diamond.