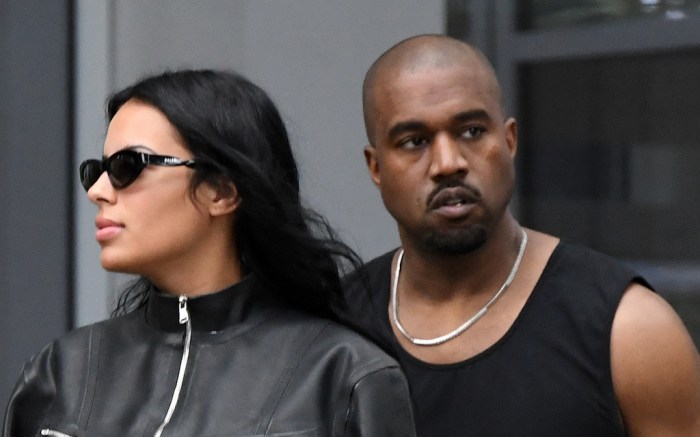 Kanye West and his rumored girlfriend Chaney Jones make monochromatic dressing chic. The “Bound 2” rapper was spotted with Jones while the two were out and about in Miami today.

For West’s outfit, he went with a black sleeveless tank top that had a flowy disposition. On the lower half, he threw on a pair of black skinny jeans that gave his outfit depth as it relates to proportions. When it comes to accessories, he opted for a platinum chunky necklace that elevated his toned-down look.

As for Jones, she wore a black cropped leather jacket that featured a silver zipper down the middle and two pockets on the front of the garment finished with silver zips. She paired the jacket with leather shorts that provided a unified feel and tied her attire together. And for accessories, she went with a pair of sleek black cat-eye sunglasses.

To ground everything, West went with a pair of tall Black Diamond boots in black that almost came up to his knees. The boots are made of plastic and leather and incorporate a distinct hexagonal pattern on the front panel of the shoes. This is not the first time that West has worn these boots and others just alike that emphasizes functionality just as much as fashion. He has an affinity for Red Wing boots that he paired with casual separates to create an intriguing look due to the mixtures of textures.

Jones went with a pair of tall chunky black boots that had a white star splashed across the front of each shoe. The footwear had multiple panels across the shoes and that created a rugged appearance.

Yeezy is often looked at for his trendsetting abilities in both music and fashion. For years, thanks to his Yeezy brand, he created waves and shifted streetwear culture due to his infectious sneakers and trendy clothing alike. His tastes still tend to live between casual and stylish. For example, recently, we’ve seen Ye wear a black leather jacket, jeans and a black cutout balaclava for a fashionable ensemble.

Jones has just stepped on the scene, but she has also already shown her penchant for minimal, casual ensembles that focus on construction. For example, she tends to gravitate towards swimwear, leggings and T-shirt dress that all align with her aesthetic. And when it comes to designers, she favors Balenciaga and Alexander Wang.