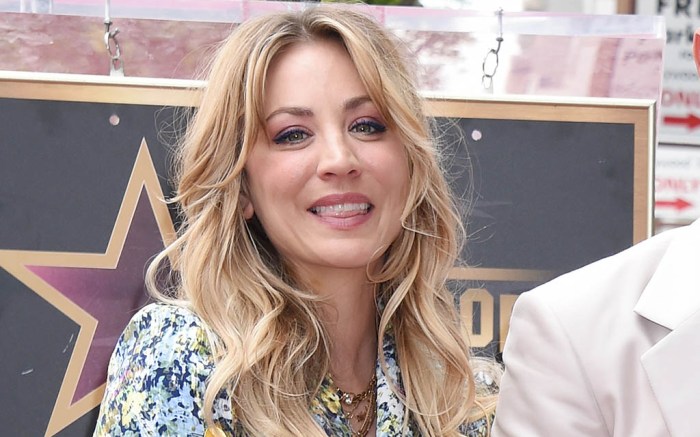 Kaley Cuoco has fans seeing double once again on set for the movie “Role Play.” The actress posted a behind-the-scenes photo of her standing beside her stunt double Monette Moio, both parties wearing identical outfits down to their shoes.

“The Flight Attendant” star and her on-set “twin” wore fitted black leather pants with a shiny finish, which the star paired with a risky plunging black leather bra top held up with thin spaghetti straps. The Yes, Norman Productions founder wore her long blond locks down and in a drastic side part along with Moio.

The grungy ensemble was paired perfectly with chunky lace-up combat boots in black, the style featuring pronounced toes and rubber platform soles. The shoes are a durable addition to the all-leather ensemble, making them perfect for those intense action scenes Kaley was filming.

Originally designed to be worn by soldiers on the battlefield, combat boots are utilitarian footwear created for foot protection, ankle support and a gripping tread. Classically made of black leather, combat boots were adopted by counterculture movements in the 1980s and 1990s, like the goth, punk, grunge and heavy metal scenes. The rugged shoe style has become a cult classic.

For footwear, Cuoco’s style ranges from slick to utterly glamorous. The “Authors Anonymous” star is a self-professed shoe lover with an expansive collection to match — her favorites being Chanel boots and flats, as well as any footwear by Miu Miu. The actress also owns a variety of designer heels from Manolo Blahnik, Nina Shoes, Saint Laurent and Isabel Marant.