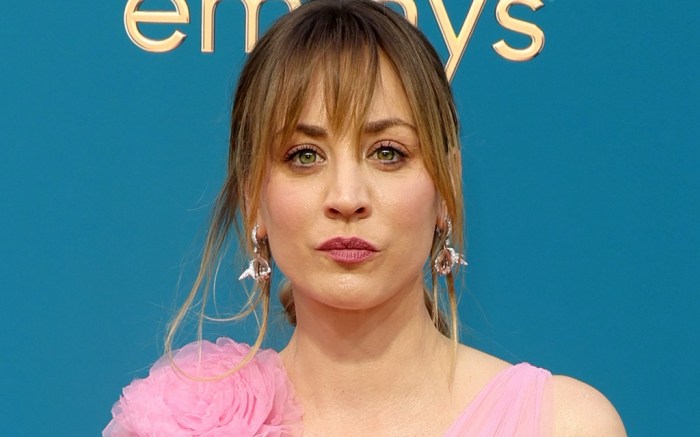 Kaley Cuoco is expecting her first baby with her boyfriend Tom Pelphrey. The “Flight Attendant” actress announced the news today on her Instagram Story, posing for a mirror selfie in ’90s style. In the picture, Pelphrey is seen with his hand on Cuoco’s baby bump.

The actress wore a white long-sleeved shirt under a black Carhartt overall, serving ’90s style while keeping it comfortable. She accessorized with a thin bracelet and small gold hoops.

As for footwear, the actress slipped into white sneakers. Cuoco wore a Nike Air Force 1. The sneaker debuted back in 1982 as the first basketball shoe to house Nike Air. The classic shoe continues to stay up-to-date with trends while also staying true to the brand’s roots.

Pelphrey opted for a more formal look with a classic white button-up and a black polka dot tie with black dress pants. The only thing that matched Cuoco’s casual look was his solid black comfy slides.

In another picture shared to her Story, Cuoco is seen in a white tank top paired with black “mom jeans”. The actress also posted photos of “mama bear” and “papa bear” coffee mugs, and confessed she had a “Subway sandwich craze that lasted for 3 days.”

The couple made their relationship Instagram official back in May. Since then, the “Ozark” star and Cuoco have been seen together on numerous occasions. They accompanied each other to the 74th Primetime Emmy Awards ceremony where the actress was wearing a custom bubblegum pink Dolce & Gabbana gown.

Cuoco has been a big fan of the luxury designer lately as she has been seen in two sparkling suits from the brand, one at “The Tonight Show with Jimmy Fallon” and the other at her newest film “Meet Cute” premiere.