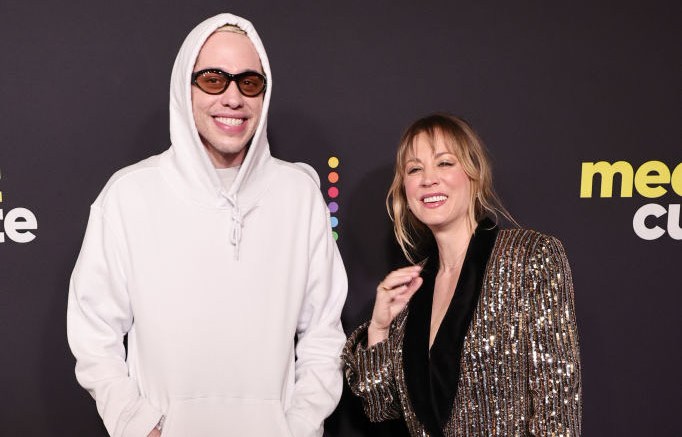 Kaley Cuoco decided she was going to have a golden moment on the red carpet for the New York City premiere of “Meet Cute.”

For the occasion, Cuoco wore a gold sequined jacket with toggle fastenings as a dress by Dolce & Gabbana. For footwear, she stayed on the bedazzled theme with a pair of double-strap open-toed Manolo Blahnik heels with a crystal buckle. She accessorized with a gold clutch complimenting her jacket.

Her jewelry accessories included several rings adorning her fingers, a small chain necklace, and a pair of costume jewelry earrings with a small sun-like symbol on them. She opted for an evening beauty look with a deep pink lip, rosy, pink blush, and subtle statement eye-makeup, including gold-toned eyeshadow, eyeliner, and mascara. She pulled her hair back and had bangs in the front, with two sets of wavy tassels framing her face.

Pete Davidson, Cuoco’s co-star in the film, accompanied the actress on the red carpet. Davidson opted for an exceptionally casual look. The actor wore a white hoodie, sunglasses, green joggers, and burgundy sneakers with electric green trim. A subtle hint of a white athletic sock could be seen. He also accessorized with a pair of round-eye sunglasses.

“Meet Cute” is a romantic comedy where Cuoco and Davidson play the leads. The film, which is also part fantasy, tells the story of a New York woman named Sheila, who finds a time machine in a nail salon to keep fixing mistakes from a date she had the previous night. Davidson stars as the love interest for Cuoco’s character. The film is scheduled to release on streaming service Peacock on Sept. 21.