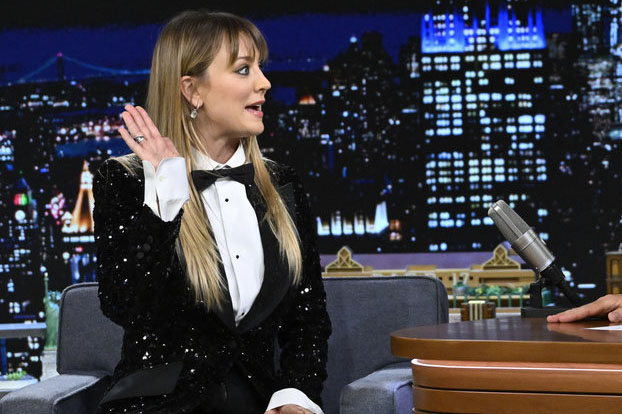 Kaley Cuoco sat down with Jimmy Fallon on “The Tonight Show.” “The Flight Attendant” actress spoke about everything from escaping escape rooms with Pete Davidson to her new movie “Meet Cute.” After their quick chat, Cuoco played virtual reality Pictionary with Broadway star Mike Birbiglia in a glimmering Dolce & Gabbana suit and matching sparkling stilettos – although she took her stilettos off to play the game.

Smartly dressed, Cuoco wore a dazzling riff on a tuxedo, taking the traditional formal wear to the next level. The feminine suit consisted of a black glimmering blazer, layered with a crisp white button down and a chic bow tie. For bottoms, the star paired the sharp style with plain black slacks that contrasted the intense shine of the blazer.

Women’s suits are tailored two-piece designs made specifically for a woman’s form. Women’s suits often feature a skirt or fitted pants with a matching blazer. The style emerged in the early 1900s during the Suffragette Movement, but didn’t hit peak popularity until the 1980s as more women entered the workforce.

Cuoco accessorized sparingly with dainty silver rings and dangling diamond earrings that only amplified the gleam of her ensemble. With her blond locks parted in the middle and her whips face-framing bangs curled, Cuoco wore light feature accentuating makeup paired with a glossy pinkish-nude lip.

When it came down to footwear, Cucoc’s shoes also mirrored that glamorous luminosity her ensemble exuded. The 36-year-old stepped into pointed black stiletto style heels, adorned with large sharp crystals on the toes and straps that reflected the professional studio lights in a dreamy manner. The shiny suede style was situated around Cuoco’s ankles, fastened in place with silver buckles to keep the heels from moving.

Cuoco’s shoe rotation consists of Chanel boots and a variety of flats, as well as any footwear by their ever inventive brand Miu Miu.