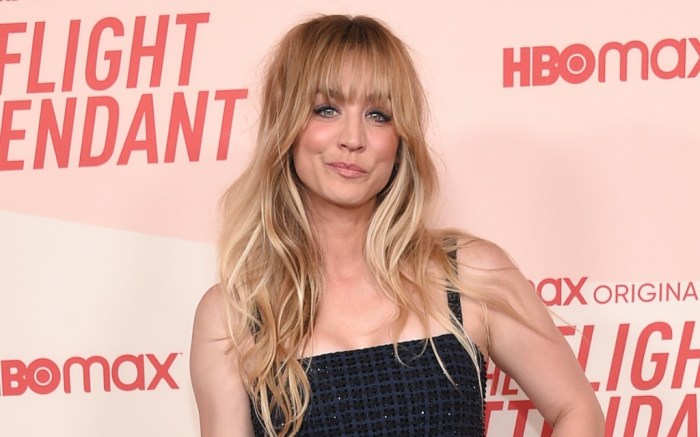 Kaley Cuoco looked chic last night when she attended the season 2 premiere of “The Flight Attendant.” Cuoco serves as the lead in the HBO Max series, which debuted in 2020. To the premiere, held in LA, Cuoco wore a floor-length black gown from Christian Dior. Her dress featured a sparkly bodice with thick straps and a tulle overlay that fell over top of the skirt. She added simple earrings as well as a few rings to her understated glam look, and wore her blond hair down in loose waves.

“The Big Bang Theory” alum’s shoes were hidden underneath her long gown. But based on her previous red carpet style, Cuoco likely wore a pair of sharp heels. In the past, she has been known to don colorful and bright creations by luxury houses like Oscar de la Renta, Prabal Gurung and Dolce & Gabbana. She has also embraced labels like Hermès while also supporting newer brands like Azzi & Osta and Cong Tri.

For footwear, the “8 Simples Rules” actress tends to slip into shoes that are eye-catching, whether the silhouette is a sleek pump, chunky platforms or sneakers from brands like Christian Louboutin, Nike and Birkenstock.

She recently wore a mini dress featuring all the colors of the rainbow paired with gold platform heels ahead of the W Magazine Best Performances Oscar party in Los Angeles.