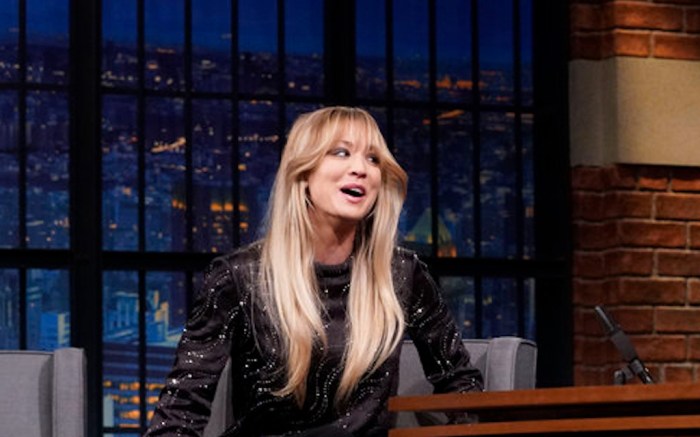 Kaley Cuoco gives a lesson in matching glittery pieces. “The Big Bang Theory” actress attended “Late Night With Seth Meyers” last night in New York City, where she sat down with Meyers to talk about why she was nervous about getting a second season of HBO Max series “The Flight Attendant,” how Black Orphan inspired the show and her failed pranks. The other guest alongside Cuoco was Aasif Mandvi, who talked about what it was like becoming a father during COVID, his comedy panel game show “Would I Lie to You?” and being an actor at murder-mystery parties with Connie Britton.

For the outfit, she donned a sheer black long sleeve top that incorporated eye-catching silver glittery details. The top had a crew neck and a long hemline. On the lower half, she wore a pair of black flowy wide-legs trousers that added movement and volume to her sophisticated ensemble.

Cuoco finished off her look with a pair of silver slingback pumps. The heels had a pointed-toe design and a height of approximately 3 inches that tied her look together nicely.

When it comes to Cuoco and her clothing tastes, she tends to fancy comfy and modern silhouettes. For example, last year, during the summer, she wore a silky printed slip dress coordinated with black thong sandals for a casual-chic outfit.

Thong sandals feature a piece of material between the first and second toes, which acts as a source of security for the entire front of the shoe. Thong sandals can either have an open back or have an ankle-encircling strap for support. Flip-flops are the most popular type of thong sandal, however, some elevated styles have stiletto heels.

The “8 Simple Rules” star walks down red carpets in colorful and bright creations by fashion houses like Oscar de la Renta, Prabal Gurung and Dolce & Gabbana. She has also embraced labels like Hermès while also supporting newer brands like Cong Tri and Azzi & Osta. For footwear, the entertainer tends to slip on shoes that are eye-catching, whether the silhouette is a sleek pump, chunky platforms or sneakers from brands like Christian Louboutin, Nike and Birkenstock.

Click through the gallery to see Cuoco’s big year in shoes.

Put on a pair of glittery heels for a touch of sparkle.