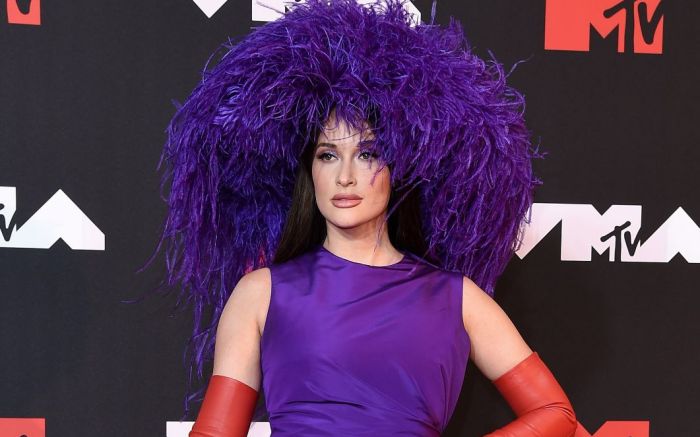 Kacey Musgraves knows how to strike a pose.

The singer sparkled in pictures taken by her stylist Erica Cloud from her Atlanta show yesterday. Musgraves is headlining a 15-city trek on her Star-Crossed: Unveiled tour in support of her upcoming album by the same name. The tour kicked off last January and will end in Los Angeles with headliners like Kin Princess and Muna.

The performer wore a casual athleisure set with ruching on the sleeves and on the pants. The casual look was elevated with the addition of a sparkling bra top, which had the singer standing out on stage like a disco ball. The top was slightly cropped while the pants were wider and loose. Musgraves danced and sang on stage and her outfit allowed for a comfy yet chic performance, which could help to enhance movement. The singer accessorized with a pair of large silver hoops, leaving the rest of the shine to her top.

Musgraves stepped into some chunky white combat boots for her appearance on stage. The boots also made it easy for the singer to get comfortable with a shoe made for walking and jumping around. Combat boots have become a staple for celebrities for their comfort and the height they provide. It’s a  shoe style that can easily be paired with multiple looks. Whether on stage or just going out, combat boots are versatile enough to up the ante on any ensemble. The athletic look on Musgraves is one we’ve seen before, but still manages to wow.

See more of Musgraves’ style through the years.

Get sleek in combat boots.