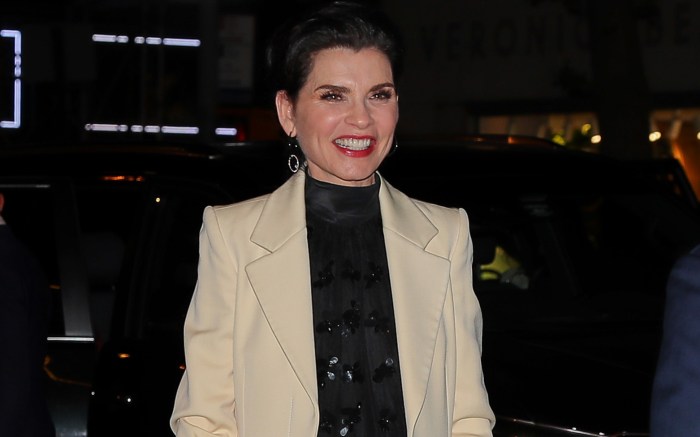 Julianna Margulies elegantly arrived at The Mark Hotel for the Albie Awards afterparty in New York City last night. She got reunited with her former “ER” co-star George Clooney and his wife Amal Clooney at the event.

“The Good Wife” actress looked glamorous in a black sleeveless halter neck dress with sheer tulle embroidered, paillette flowers, and a keyhole back. The gown is by Carolina Herrera. The actress opted for a cream floor-length blazer to pair the neutral look with an accent of color.

Margulies elevated her look with a pair of black suede sandals with an ankle strap for extra support. She added a solid black clutch to the neutral ensemble and completed the look with a black and white diamond statement ring and matching hoops.

The actress worked with stylist Jeannann Williams to put this ensemble together.

Margulies kept her dark brown short hair in a side-swept look with her makeup kept subtle with a light eye look and a red lip. Her entire makeup look was created using Dior Beauty products. This glamorous look was made by hairstylist Ricardo Rojas and makeup artist Brigitte Reiss-Anderson who has also worked with Hunter Schafer, Eva Longoria, and Anne Hathaway.

The Emmy-winning actress arrived with her husband Keith Lieberthal who opted for a classic black and white tuxedo look. Other stars that attended the afterparty along with Marguiles were Drew Barrymore, Dua Lipa, and Julia Roberts.

The award ceremony is named after Albie Sachs, a South African judge who was imprisoned for his fight against segregation. They honored journalists, human rights leaders, and other global justice like Sachs who take great risks for the work they produce.