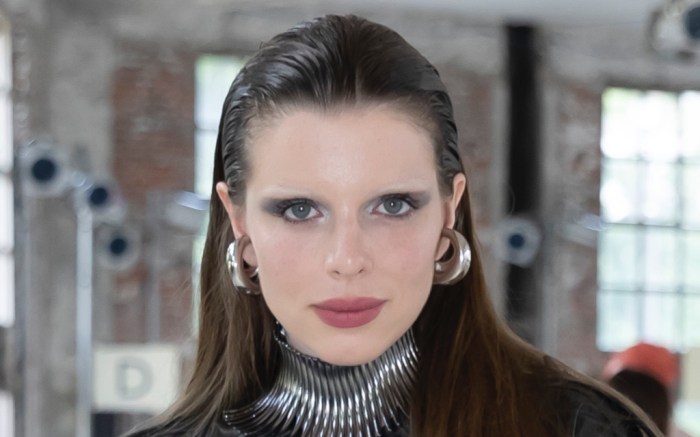 Julia Fox is never one to shy away from trying new things.

In a recent video posted to her Instagram and TikTok on July 22, Fox experimented with a new silhouette and some dangerously high boots. The model and muse has been quite active on TikTok since she rose to fame, garnering her a cult following of fans and admirers almost over night. It all started with some help from Kanye West, now known as Ye, before Fox soon became a viral meme for her role in “Uncut Gems” and well, the rest is history. These days, Fox is well known for her intense fashion and vibrant personality which she showcases in this very video.

This @mowalola moment 🤩 video by @bendraghi

Set to funky music, the model was captured in all her glory wearing a bright banana yellow mini dress with a hood. The vibrant dress was long sleeved with a black lace-up detail strung through silver metal eyelets that started at the opening of the hood, traveling down foxes face in a criss-crossed pattern, and down the plunging v-shaped neckline. Fox’s face is barely visible under the lacing and hood, however the actress and model can be seen looking broodingly into the camera at times with little to no makeup on, her hair tucked back into the hood. Fox donned lengthy pitch black acrylic nails, amping up the drama.

While this style of dress was fairly new to the model, the shoes she wore with the hoodie dress were a Julia Fox staple. The actress donned knee-high latex boots with crazy chunky platforms and even crazier sky-high stiletto heels. The black boots practically lift Fox right off the ground, giving the 5’7″ star a great deal of extra inches. Fox seems to be a pro at walking in tricky heels and it doesn’t look like she’s going to let up yet.

Check out some of Julia Fox’s sleekest looks.