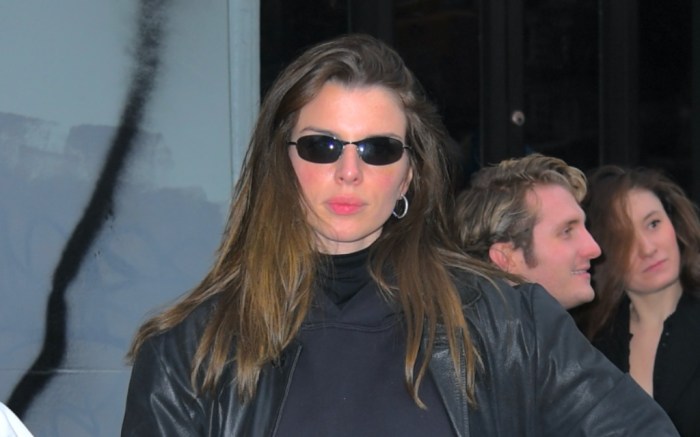 Julia Fox looked like she took inspiration from a science-fiction film in her latest look.

The actress hosted a birthday party for her 1-year-old son in NYC on Monday. Her all-black outfit consisted of a black hoodie worn underneath an ankle-length black leather trench coat. She wore black leather straight-leg pants as well. Fox added black gloves and ’90s-inspired sunglasses with the look.

Fox kept the leather look going with her footwear. She opted for a pair of sleek black pointed-toe boots. The boots featured a thin stiletto heel reaching at least 4 inches. Fox has been known to wear this style of shoe, and was just seen on a date night with boyfriend Kanye West in another pair earlier this month.

Fox has a trendy sartorial taste, which she exudes in silhouettes like printed catsuits, structured separates, slinky dresses and flowy skirts. After Fox burst onto the fashion circuit in 2019, she’s been seen in versatile pieces on the red carpet, with outfits often including midi-length dresses with sequins or silky textures.

On the footwear front, the “Uncut Gems” actress tends to favor black pointed-toe pumps while on the red carpet. Occasionally, she’ll branch out in pointed-toe boots in a similar tone. She’s also been seen in midi skirts paired with bodysuits and turtlenecks, creating a contrasting effect.

See more of Fox’s sleekest looks over the past few years.

Slip into a pair of sleek black leather boots.