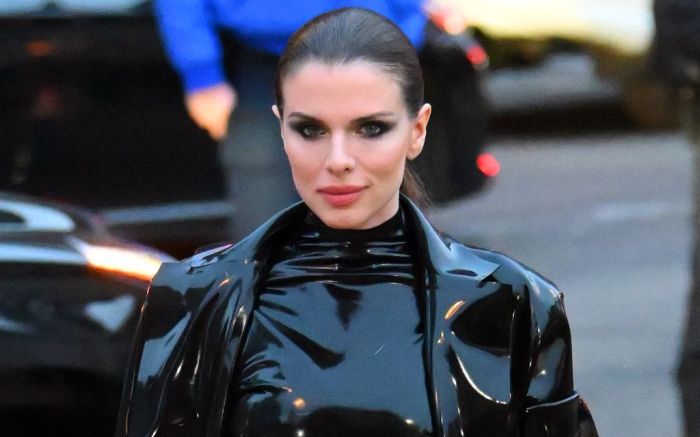 Julia Fox made a dramatic entrance at the New York City premiere of “The Batman” on Tuesday night. The Italian model served a sartorial moment as she arrived in a Catwoman-inspired ensemble.

Fox’s outfit consisted of a silver metallic minidress by Lanvin, which featured a cartoon image of Catwoman herself, as well as a black latex high-neck bodysuit and a floor-length latex trench coat. She topped her look off with latex opera gloves and pulled her brunette locs back into a low ponytail. The “Uncut Gems” actress continued to channel the character by adding bold winged eyeliner to a dynamic smokey eye.

To top everything off, Fox slipped into a pair of killer thigh-high patent leather boots. The stretchy style included a sharp elongated pointed-toe and a striking stiletto heel.

Over-the-knee boots have become an essential staple this winter season. Several stars like Mary J. Blige, Heidi Klum, Lala Anthony and Nicki Minaj have complemented their looks with the silhouette in recent weeks.

Fox has a personal aesthetic that includes edgy and trendy pieces. The influencer has worn a variety of sleek dresses and catsuits on past red carpets, hailing from Dior, Alexander Wang and Jean Paul Gaultier. The “No Sudden Move” star has also made a name for herself within the fashion industry by starring in campaigns for Diesel. Earlier this year, she made her runway debut during New York Fashion Week for LaQuan Smith.

Click through the gallery to see Fox’s sleekest looks over the years.

Elevate your ensemble with a pair of thigh-high boots.