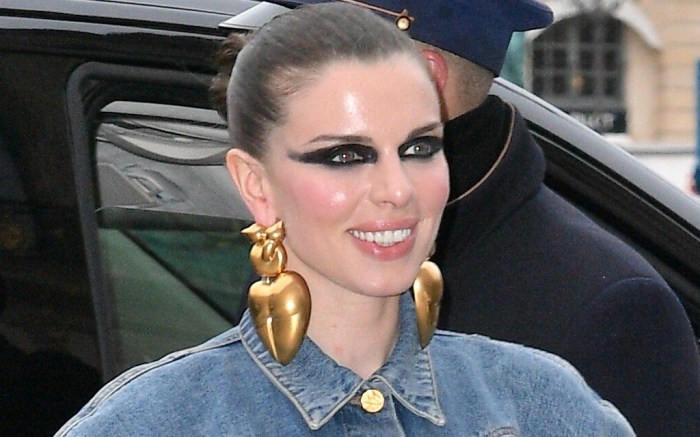 Julia Fox and Kanye West made their official couple debut in Paris this week—in Kenzo’s front row, no less.

The actress stepped out with West for BAPE designer Nigo’s debut at the Japanese brand for the Fall 2022 season, following his arrival as artistic director. The duo were joined in the front row by a cluster of fashionable friends, including Pharrell, J Balvin, Pusha T, Tyler, The Creator and Avani Gregg.

Fox’s look was complete with a pair of blue denim Diesel boots, created by Y/Project designer Glenn Martens. The former dominatrix’s style took on a “pant boot” silhouette, attached to a pair of jeans in a pant-footwear hybrid style. Layered beneath Roseberry’s jeans, the pair featured stiletto heels totaling at least 4 inches in height, as well as sharp pointed toes. The style also included glossy brown toe accents. When paired with Fox’s denim pieces, the boots gave her look a streamlined and monochrome effect—as well as a new, literal take on “double denim” styling.

Pant-boot styles have emerged in recent collections from several brands, including Balenciaga, Richard Quinn and Saint Laurent, providing a streamlined alternative to wearing either boots or pants. Kim Kardashian, Cardi B and Hailey Bieber have tackled the trend in recent weeks.

The “No Sudden Moves” actress has worn a variety of sleek dresses and catsuits on past red carpets, hailing from Dior, Alexander Wang and Jean Paul Gaultier. Her formal footwear has also included pointed-toe pumps by Christian Louboutin, Giuseppe Zanotti and Manolo Blahnik. After undergoing a recent makeover by West, the star has primarily been seen in pointed-toe Diesel and Balenciaga boots, paired with edgy ensemble by both brands—as well as independent labels like Miaou.