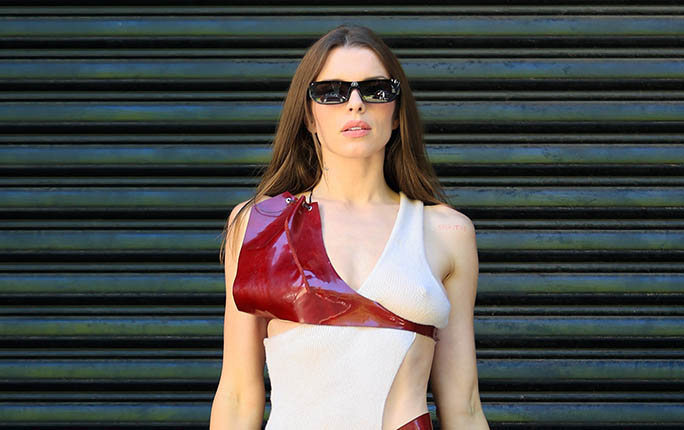 The sheer number had a long slanted side cutout and a wide latex fabric that wrapped around her chest and draped on her shoulder. She teamed the bralette with a matching bikini bottom that peaked out under her dress. The garment also featured a train, which gave the illusion of a waterfall as it cascaded down and covered her feet.

Fox styled her brunette tresses straight and opted for a fresh face with no makeup. To place more emphasis on her outfit, she kept her accessories minimal and covered her eyes with sleek black shades.

The hem on her dress allowed for a quick peek at her footwear choice, which appeared to be a pointy silhouette. The slick and shiny shoe style had a sharp pointed toe. When it comes to footwear, Fox favors pointed-toe pumps by Christian Louboutin, Giuseppe Zanotti and Manolo Blahnik as well as, thigh-high boots by Alexander Wang.

Fox is known for stepping out in daring ensembles. The superstar muse has a personal fashion aesthetic that is filled with leather and latex galore. She knows how to add key elements to her outfits that stay true to her edgy style. She has worn a variety of sleek dresses and catsuits on past red carpets, hailing from Dior and Jean Paul Gaultier. She has also made a name for herself within the fashion industry by starring in campaigns for Diesel.

Flip through the gallery to see Julia Fox’s sleekest looks over the years.