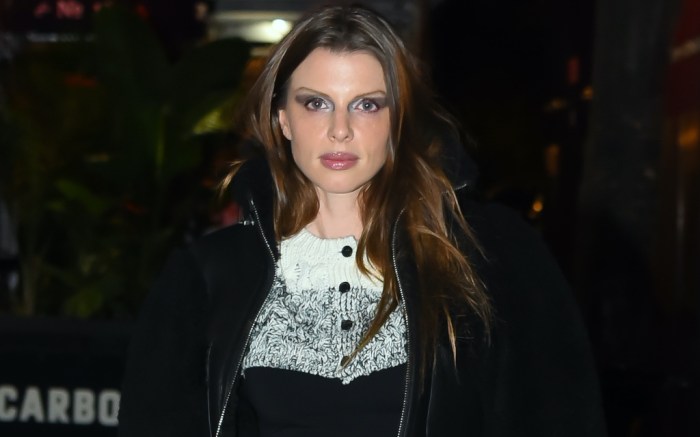 Julia Fox layered up for a night out.

The “Uncut Gems” actress stepped out in New York last night. She wore a black layered look for the outing, including black Edikted Oversized Boyfriend Cargo Pants and a black corset. Her high-waisted pants featured a baggier style and she wore the strapless corset top over a knit sweater with buttons — an unexpected pairing. Fox kept warm with a black cropped puffy jacket worn over the layered tops. She also carried a black baguette-style purse.

Fox added a pair of trendy ballet flats to complete her outfit. She wore black patent leather flats with a rounded toe. After it hit the runway in Miu Miu’s fall 2022 runway show, the style has returned to street style and everyday wear in the footwear industry this summer and fall. Thanks to reinventions of the classic pair’s textures and hues, the style got a refreshing update. Stars like Paris Hilton and Bella Hadid have been known to rock the shoe over the past few months.

When it comes to her formal style, the “PVT Chat” actress‘ footwear has included pointed-toe pumps by Christian Louboutin, Manolo Blahnik and Giuseppe Zanotti. In recent months, Fox has become a rising star in the fashion world, attending Diesel and Versace shows during Fashion Month and making her runway debut in LaQuan Smith’s fall 2022 fashion show. More recently, she starred in Knwls’ fall 2022 campaign.

PHOTOS: Check out some of Julia Fox’s most sleek fashion moments over the years.